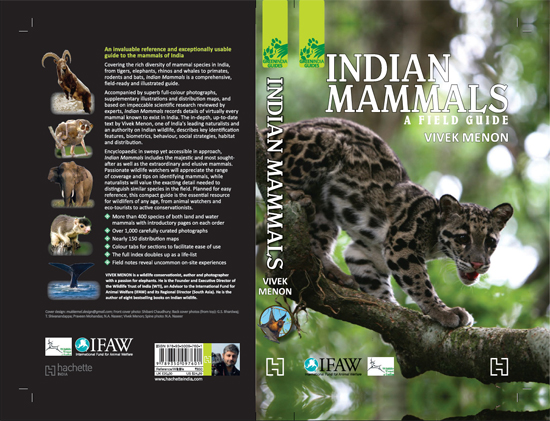 Did you know the following facts?

There are 400 species of mammals in India. Clouded leopards, caracals and desert cats mew like domestic cats. The sun bear is also known as the dog bear because of its dog-size frame. The rusty spotted cat is the smallest cat in the world. Tigers mostly eat prey that weigh more than 30kg. The Asiatic lion is less social than its African counterpart. The golden cat resembles a miniature North American puma. The rarest wild pig, the pygmy hog, was feared extinct till 1971. The Malabar civet is the most endangered mammal in India. There are over 110 species of bats in the country. The greater one-horned rhino is the largest mammal in India after elephants. And rhinos can clock 55 kmph if they wish to chase you.

The list goes on, in Vivek Menon’s second edition of Indian Mammals: A Field Guide. Menon is the executive director and chief executive officer of the Wildlife Trust of India and has a particular interest in pachyderm welfare.

This encyclopaedic guidebook is a must-have, both for amateur and professional naturalists. Indian Mammals includes the majestic and most sought after, as well as the extraordinary and elusive, mammals in the country. Passionate wildlife watchers will appreciate the range of its coverage and tips on identifying mammals, while naturalists will value the exacting details that have been provided to help them distinguish similar species in the field.

Until the beginning of this century, The Book Of Indian Animals (1948) by S.H. Prater was the standard reference for naturalists. Menon changed everything with A Field Guide To Indian Mammals (the 2003 edition), which became the first comprehensive guide that attempted to cover all mammal species in India. This new edition, which took eight years to complete, goes one step further, especially in detailing, while maintaining the “easy on the eye” criterion, a necessity for field guides.

Apart from the visuals, contributed by the best photographers in the field, there are illustrations, diagrams and distribution maps, colour tabs for different sections, field notes and guidance for interpreting behaviour on the basis of animal tracks, feeding sites, alarm calls, aggregation, and scats.

The new edition also follows the latest system of classification that has evolved, based on genetic knowledge. For example, the common langur has been split into six different subspecies across the country. Further, the new edition includes new species such as the Arunachal macaque and the Leaf Deer, which have been described as being from India since 2003. It also takes the identification of all species to the sub-specific level, so that different-looking animals of the same species can all be identified in the field.

All mammals have unique skeletal characteristics: The dental bone meets the squamosal bones to form the lower jaw point, and there is a specialized structure of the middle ear with three unique bone structures (malleus, incus and the stapes) attached to the tympanum or eardrum.

Indian mammals are ancient beings. There is evidence of the existence of mammalian life in the subcontinent when the split with Gondwanaland took place 570-510 million years ago—Gondwana included most of the land mass in today’s southern hemisphere: Antarctica, South America, Africa, Madagascar, Australia, Arabian Peninsula and the subcontinent. A 66-million-year-old condylarth tooth found in India is supposed to belong to the precursor of modern hoofed animals.

There is much to learn from Menon’s own experience in the wild. For instance, his insightful field notes will tell you that the state animal of Chhattisgarh is the van bhainsa or wild buffalo. However, as Menon puts it, it is fast becoming “one” bhainsa! There is only one female left among seven males. That one female is called Asha, or hope.

Menon often offers directions. “The only place you can see an endangered mountain goat without getting out of your car is at Rajamalai in Eravikulam National Park. Drive on the road to Munnar and amidst the tea gardens, a short diversion takes you to the abode of the Nilgiri Tahr.”

He touches on folklore too: “The strangest looking ungulate in India is the Takin, which the Bhutanese believe is the handiwork of a playful monk who joined a goat’s head to a cow’s body.”

Before I go, did you know sirenians (sea cow) are considered to be closely related to elephants?