Praveen Bhargav
 The rare Grizzled Giant Squirrel was threatened by a road proposed through its habitat. 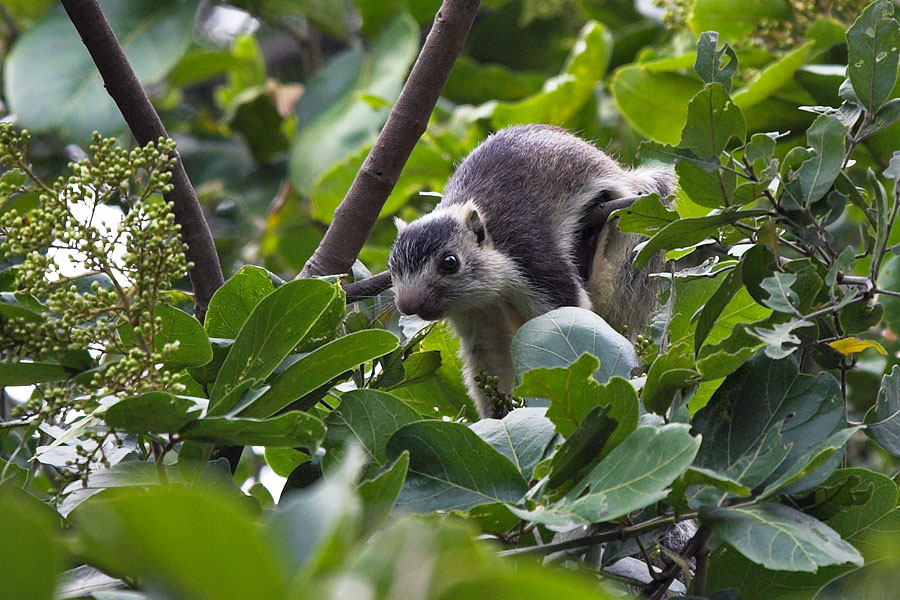 Shekar Dattatri co-authored this article, which originally appeared in the Oct 2011 issue of GovernanceNow.

Poor governance, replete with farcical meetings, subjective and improper application of the law, and unilateral decision-making, mars the functioning of the National Board for Wildlife, the apex body on conservation. The new Union Environment Minister must take urgent corrective action to restore the Board’s credibility, and protect India’s precious natural heritage from the relentless pressures of development.

Forests and wildlife in India are governed primarily by two far-sighted pieces of legislation that were ushered in during the tenures of Prime Minister Indira Gandhi: the Wildlife (Protection) Act, 1972 (WLPA), and the Forest (Conservation) Act, 1980. So far, over 650 Protected Areas (PAs) – Sanctuaries and National Parks – have been notified across India under the WLPA. Without PA status, most of these habitats and ecosystems would have succumbed to the axe, plough or industrial development.

The National Wildlife Action Plan recognizes PAs as crucial to human welfare. They are repositories of valuable biodiversity, provide watershed services, and help mitigate the effects of climate change by acting as carbon sinks. Considering their huge importance, the WLPA mandates the constitution of an apex statutory body, the National Board for Wildlife (NBWL), to frame and monitor conservation policies that will safeguard PAs. The Board comprises the Prime Minister (Chair), the Union Minister for Environment & Forests (Vice Chair), and the following members: 3 Members of Parliament, 27 public servants from various Government Departments, and 15 civil society representatives with expertise in wildlife (Non-Official Members). All members serve on the Board for a period of three years. In the past, particularly under the stewardship of Indira Gandhi, the Indian Board for Wildlife – as it was previously known – made significant contributions to wildlife conservation. Indira Gandhi’s concern for nature and her immense political clout helped bring about a paradigm shift from commercial forestry to conservation, and an expansion of the PA network in the country. Unfortunately, after economic liberalization, the original intent of the NBWL has been subverted, and it has become a clearinghouse for damaging projects within Protected Areas. The inclusion of civil society members on the NBWL – meant to provide an independent view to government – is now nothing more than window dressing, as their views and advice are largely disregarded.

The WLPA mandates that destruction or diversion of wildlife habitat, construction of tourist lodges, alteration of PA boundaries, and de-notification of PAs cannot be done without the approval or recommendation of the NBWL. However, since it is impractical for all 47 members of the NBWL to meet frequently to assess such proposals, the WLPA specifies that the NBWL may constitute a Standing Committee consisting of 10 members for the purpose. The notification by the Ministry of Environment and Forests (MoEF) in this regard prescribes that: “Subject to the general superintendence, direction and control of the National Board for Wild Life, the Standing Committee may exercise all powers exercisable by the National Board for Wild Life under the Wild Life (Protection) Act, 1972 (53 of 1972) or the rules made there under, unless otherwise specified in this notification”.

The travesty is that, while the Standing Committee has assumed all the powers of the NBWL, the stipulated “general superintendence, direction and control of the NBWL” is non-existent. The Standing Committee, chaired by the Minister for Environment and Forests, operates completely independently, without even getting its decisions ratified by the NBWL. This self-granted autonomy not only makes a mockery of governance, but also has serious consequences for wildlife.

While the full NBWL meets under the Chairmanship of the Prime Minister at most once a year, for a two hour ritual, the Standing Committee meets every three months to decide the fate of 30 – 60 proposals, mostly relating to diversion of forestland from PAs. The proposals include dams, roads, highways, mines, power lines and other infrastructure projects that are harmful to PAs and their wildlife. The MoEF’s predetermined goal at these meetings appears to be to clear as many of the proposals as possible. Standing Committee meetings typically last a mere three hours, which is a grossly inadequate timeframe in which to make informed decisions on a large number of projects with complex dimensions. Often, the Agenda is sent to non-official members only two or three days before a meeting, instead of two weeks in advance as stipulated by the rules, giving them little time to study the proposals. Members are then hustled through the proceedings in great haste, with the Chair unilaterally clearing many proposals without the slightest due diligence, and in total disregard to objections and dissent. Worse still, minutes of meetings are sometimes falsified to show unanimous approval for a project despite the written dissent of non-official members.