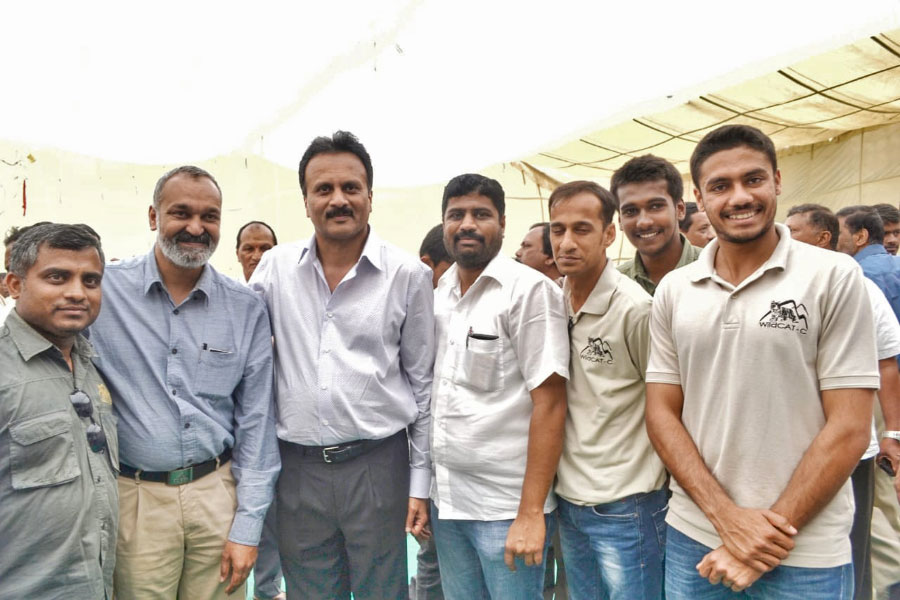 Siddhartha……humble, soft spoken, confident, reassuring, supportive, appreciative, respectful, helpful, approachable. Such are the superlatives that would come to mind to anyone who had interacted with him. While the world knew him as a successful entrepreneur, philanthropist and humanitarian who helped thousands of people, very few knew him as a dedicated supporter of conservation. Siddhartha was already a successful stockbroker when I was finishing college, and was in the process of becoming a well-known personality in our Chikmagalur District in the late eighties. We knew each other through our local social network, but our connection was strengthened immeasurably through the school that we both attended, Mountain View, and our beloved Principal, the late Mrs Azra. However, my association with him at the time was limited to meeting up at social gatherings.

When I started to work on conservation issues in Chikmagalur, along with my friends/colleagues, and became vocal in raising issues related to wildlife and forests, he appreciated what we were doing, and started interacting with us. He supported our efforts in nature and wildlife education during annual Wildlife Week programmes and regularly invited us to volunteer for all the nature-related programmes organized by his Amalgamated Bean Coffee Company. These were great opportunities to get to know him personally. Despite his busy schedule, he kept abreast of our activities, even when we were not in touch with him. At times, we were surprised to learn that he was keeping a tab on us, as though he were a part of our conservation group. When the voluntary rehabilitation of people from the Bhadra Tiger Reserve was underway – a government-funded project often referred to as a successful and model rehabilitation project in India – his strategic interventions in its implementation were crucial. He supported our efforts in the project by urging the State Government to release its share of the money in a timely manner. His constant encouragement for the fair implementation of the project, and his concern for ensuring the welfare of the 500 or so families for a smooth transition to their new land, was laudable.

His ownership of large coffee estates in the hills surrounding the Bhadra Tiger Reserve was such a big blessing for the protection of the Reserve. He practiced wildlife-friendly ways of management even before the term ‘wildlife friendly’ had become fashionable. He preached and practiced minimum use of pesticides to grow coffee. Hunting of any wildlife in his estates was a strict no, no, and although he loved, and cared for, his workers, and created thousands of jobs, he did not think twice about terminating many labourers who were known to hunt, whenever he purchased a new estate. He also believed in retaining native trees, and maintained good tree cover in all his estates. Additionally, he would always be the first person to send his labourers to assist in fighting forest fires in Bhadra. If any estate he bought had encroachments, he cleared them voluntarily and returned them to nature. He did all of this not just for his own satisfaction but also to set a good example for other planters to follow. There was free access within his estates to many of us, including forest officials, wildlife researchers and our group members from WildCAT-C. Whenever there was a need to include his estates in wildlife research surveys, he happily instructed his estate managers to allow the teams into any part of his estate for any period of time. Such studies gave us amazing insights into the presence of innumerable wildlife species outside protected areas.

Although the owner of a chain of luxury resorts himself, he paid a large sum of money to buy out a resort that was being built next to the Bhadra Tiger Reserve, just to withhold its operation. He felt that a resort’s presence so close to the Reserve was not desirable. He promptly demolished all the existing buildings and returned the land to nature by planting trees and coffee saplings. His only goal was to avoid any disturbance to wildlife. Similarly, he bought out a mini-hydel project situated on a beautiful waterfall in the mountains close to the Bhadra Tiger Reserve, again by paying a big sum of money, just to abandon the project and retain the beauty of the mountain stream with its undisturbed flow. He would say with a smile, “this is my little contribution to wildlife conservation”. Clearly, any sum of money was too small for him when it came to his love and passion for our beautiful landscape and wildlife. His efforts to nullify any attempt to concretise and destroy the wilderness in Chikmagalur was straight from the heart. His estates in Chikmagalur are in some of the most beautiful and ecologically sensitive wilderness areas. Restraining people from promoting or establishing resorts/hotels in these areas, though he owned thousands of acres of coffee plantations, is proof enough of his respect for nature. Anybody else in his position, in this booming tourism era, would probably have commercialised and caused tremendous stress on these sensitive lands. In fact, when some resort owners, whose illegal constructions we were opposing and fighting in court, complained to him about us, he patiently listened to them and told them “What they are doing is right. Nothing should have been constructed on those sensitive mountains in the first place”. He was aware of the beauty and importance of our district and was among the very few who truly believed in retaining it as it was.

Beyond all, he would always reassure us, saying, “don’t worry Boss, we are there for you. Let me know if you need anything.” These reassuring words are permanently etched in our minds. His willingness to speak to anybody in power for the cause of conservation, be it an MLA, a minister, a government officer, a religious leader or anybody else under the sun, whenever we needed it, was such an amazing confidence booster. Often, he even offered unsolicited financial assistance for our work. His words, “Guru, let me know if you need money”, were not just offered as a lip service; there was a standing instruction to one of his people to provide anything we wanted at any point of time. We were grateful for this kind offer, although we never felt the need to accept it.  He never claimed any credit for all his good work, nor clambered onto any stage for accolades. He was always the silent supporter.

For years, Cafe Coffee Day in Chikmagalur has been a regular hangout for our entire team; for brainstorming; during times of joy and sorrow, and our onservation ups and downs. Siddharth lived for others. He was amazingly committed to our district, truly wanted to improve the community, safeguard our lands and retain its beauty. Chikmagalur was always his priority. He wanted to do his best for the people and created thousands of respectful opportunities. He thought and did good, and managed to reach out to people and touch them. He supported any, and many, who went to him. The thought that there was somebody like him, who believed in, and encouraged, our work, made us stronger and more confident. That he was always there for us was like a comforting safety net. Kudos to this legend and visionary, who was our guardian, mentor, and supporter. Losing him is like losing somebody in our own family. Wildlife in Chikmagalur has lost a great friend and we will forever miss his umbrella over our heads. Someday, we will all die, but what we do and how we live before our end comes is all that really matters. (The writer is a respected conservationist based in Chikmagalur. The views expressed are personal).

Death of a Mother Chameleon