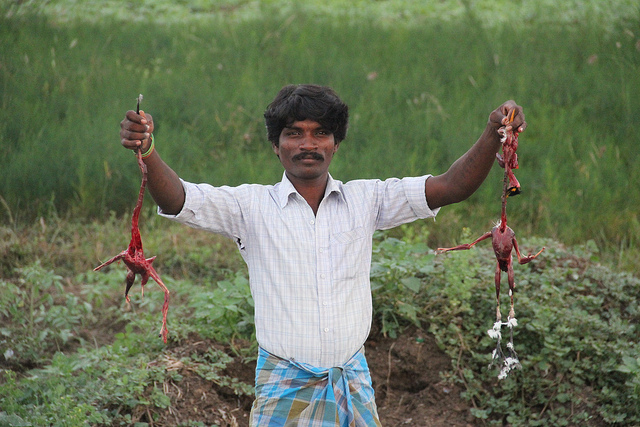 In a village near Chennai, egrets are baited using poisoned earthworms on a regular basis. The ritual is to then barbecue them quickly, as fresh, exotic meat for the evening's booze.

I recently witnessed a grotesque ritual in my village, Rettanai, near Chennai, Tamil Nadu. We grow paddy at our farm there, and the flooded fields form a nice breeding ground for frogs and crabs which attract egrets. One evening, three young men came to our farm and asked permission to cross our farm to go to the neighboring field. They were carrying an assorted collection of stuff in their hands, and out of curiosity I asked them what they intended to do. They said they were out to hunt for birds. I decided to follow them to see what they were up to. One of the guys carried a packet of Megafuran, a powerful pesticide. He emptied part of the packet into a plastic bottle and mixed it with water to form a violet coloured liquid. He warned that this concoction was dangerous enough to kill a man, let alone a bird. The men had also brought with them a handful of earthworms. They put the earthworms into a plastic cup and poured the liquid pesticide into the cup full of writhing worms. In two seconds, the worms went motionless.

Now, the guys had their bait ready. They quietly crawled to an area where a bunch of egrets were feeding and sprinkled these worms over the area. They then cleared the area and waited for the birds to take the bait. The egrets unwittingly picked up the poisoned earthworms and swallowed them. It is astonishing how quickly the poison works. The egrets dropped dead within two seconds of swallowing the poisoned earthworms. The birds were then skinned quickly and were ready to be cooked.  As one of them men held up the birds proudly, I asked him if he wasn’t worried about eating poisoned flesh. He replied that they ensure that they quickly skin the birds, and remove the intestines before the poison can reach the bird’s bloodstream.

Finally, the guys took the birds to an open area near the government run booze shop, set up a fire and barbecued them. Exotic food was now ready for their booze party.

Aren’t these birds protected under our wildlife protection acts? I learned that nobody actually complains. Farm owners turn a blind eye and indirectly encourage the killing of these birds, because they believe them to ultimately cause damage to crops. Even if they complained, they are convinced that the Police will not take this seriously and will laugh the matter away. I learned that just in the last week, this same group of men had killed 9 birds from my farm alone. I politely but sternly told them never to enter my farm and that it is strictly off limits. They got the message but unfortunately I didn’t see any regret in their eyes.