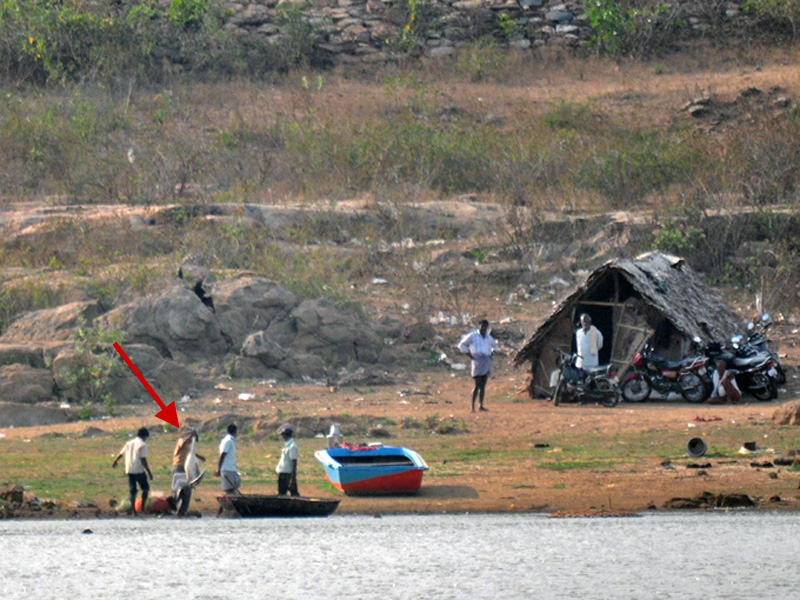 Seshadri KS
Holding its neck, a dead pelican from the coracle being transferred to a larger boat.

Commendable work by a team of Bangalore birders in reporting this incident of pelican poaching. Local hunting is widely prevalent across India in both urban and rural areas. If you come across any such incidents please report them immediately to local law enforcement officials.

Kishan SB, Deepak Jois, Amith Kumar, Aravind S and I had gone to Kanva Dam, (which is behind Kengal temple on the Mysore-Bangalore highway near Channapatna) on the afternoon of 18th Feb 2013. There was a lot of water in the dam. We could see Painted Storks, River Terns, Whiskered Terns, Spot-billed Ducks, Black-winged stilts and Black-tailed Godwits in the water.

There were a flock of five Grey or Spot-billed Pelicans (Pelecanus philippensis). As we were watching them a coracle with three men — who we thought were fishing — fired at the pelicans with what appeared to be a muzzle loading gun. Instantly, two birds fell dead in the water.

On hearing the gunshot, we immediately took some photos and video of them retrieving their booty into the coracle. We were on the right bank of the dam and this happened on the left bank half a km away.

A few moments before this, a shepherd told me that the birds would think that my camera lens was a gun and fly away as they usually did on seeing poachers. Little did we expect that we would actually witness poachers in broad daylight!

The coracle with the dead birds pulled up to some nearby shacks and two men took the birds out, holding them by their necks (see image) and put them in a larger boat. We continued taking pictures and videos. Given that they had a gun and there were about 10 of them, we tried to figure out our course of action. After talking to a few people we called 100 and they gave contacts of the local police station. The SI there was very keen to help us and assured us that his team would be there shortly.

Meanwhile we kept an eye on the poachers and the bird. They went along with their chores and the three coracles got into the water and they started laying fishing nets. The fellow who shot the bird took off on a bike leaving the birds in the big boat.

About 10 policemen came in about 40 minutes and we were glad to see them! They came on to the left bank in search of us and this must have caused some suspicion among the fishermen. The policemen told us that the area was not their jurisdiction but agreed to help us. While driving to the shack, we were joined by another police jeep and 4-5 forest officials. They were all in plainclothes.

While we headed to the shack by road (about 2 km), one person from the shack took two bags out of the boat. By the time we reached the shack, the boat was empty. There were some bird poop and some feathers but no dead pelicans or the weapon. The officials rounded up everyone and did a search but did not find anything. They took two people to the Range Forest Office (RFO) in Channapatna to be interrogated. In all this excitement, the person who actually shot the birds gave the 20-odd officials the slip.

We were told that it was hard to book a case without the weapon and the dead bird/s. We stayed till around 2230hrs and left after finishing the formalities. The next day the ranger called and informed us that even on keeping the suspect overnight, the other culprit did not surrender and they would initiate needful action based on our photographs.

Incidentally, the guy who fired the gun was related to the local fishing contractor. The contractor and a few other thugs claimed that the suspects only used crackers and that the birds were already dead. Another thug threatened to inform the media that we would be responsible if the suspect committed suicide. One of the suspects was apparently a college-going 17-year old. He promptly revealed the names of all three poachers. I hope the officials will soon apprehend them. We submitted a CD with all the incriminating evidence of the poaching.

Also, about 2-3 yrs ago, the previous fishing contractor had been caught with terrapins and snakes, and his contract was terminated and given to the present one. The officials were keen on terminating this contract too.

The fishermen told us that there is a good demand for bird meat in the area and the pelicans would for fetch the hunters Rs. 300 a kilo.

Note from CI – It would have been good if the birdwatchers filed an FIR at the local police station. This would have strengthened the case since a weapon was involved and an arms act violation is a serious offence. Only the police has jurisdiction on this and not the Forest department as this was outside a protected area. 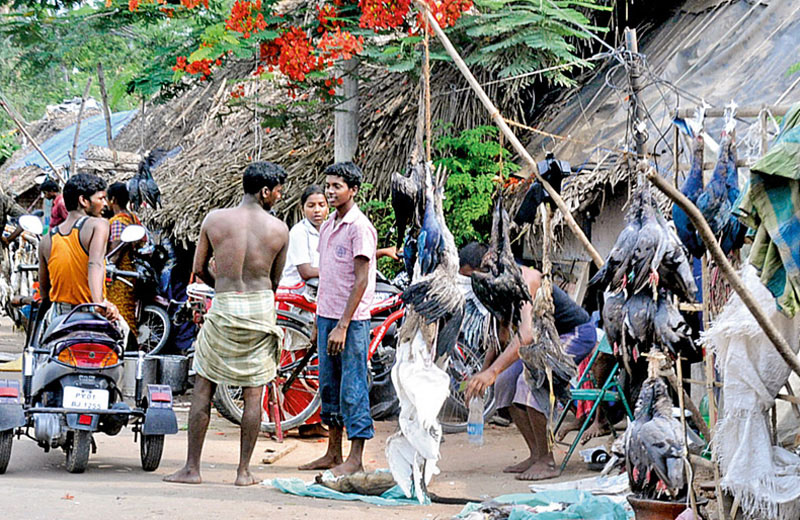