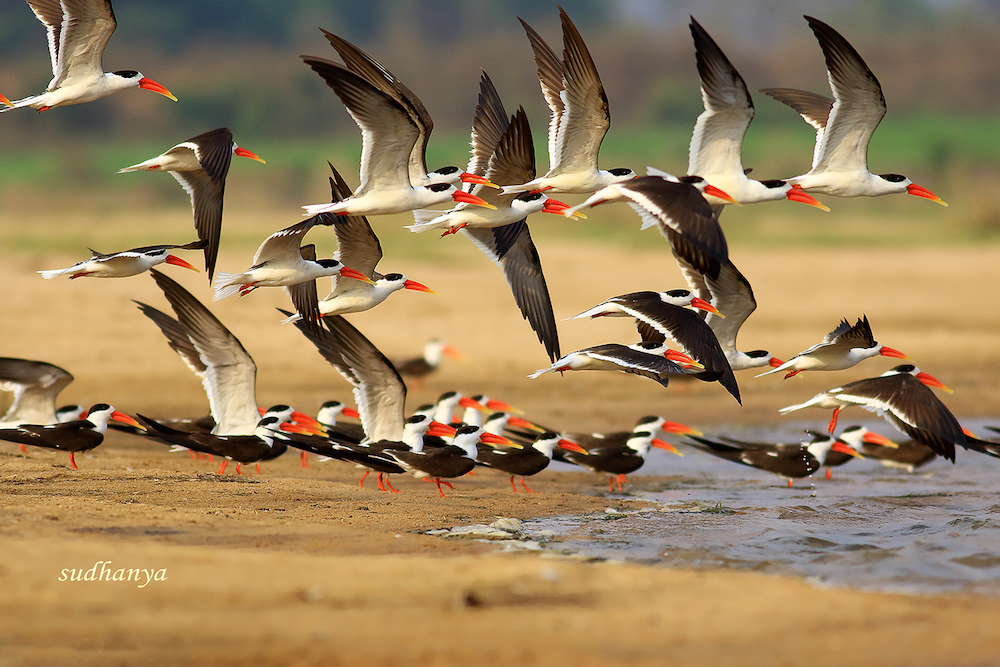 This significant finding of nesting Indian Skimmers, Black-bellied Terns and River Terns at Munduli in Odisha merits highest conservation efforts at all levels to enable increase in numbers of these vulnerable species.

It is one of the least studied species in the subcontinent with inadequate observations on its breeding behaviour and biology. Birdlife International and IUCN have declared it as “Vulnerable” (see Birdlife factsheet on the species) based on its fast depleting numbers which is assumed to be between 6000-7000 individuals only. Its known nesting site so far is the Chambal sanctuary where conservation strategies have been adopted. The Indian Skimmer (Rynchops albicollis) however needs much more attention than what it has got in terms of protection of its habitats and conservation measures.

The Indian Skimmer has been reported from various habitats in Odisha, including Bhitarkanika, Dhamra, Satkosia, Nalabana and Munduli. The species has a strong population in a few of these habitats with 600 plus individuals being sighted in Munduli in August 2015. However no nesting site of the species has been documented from the state so far (Rahmani & Nair, 2016) although experts have been of the view that the species should be nesting in some remote island along the river belts in the state where they are sighted. No sighting of the species has been reported from Bhitarkanika in the last 5 years which is attributed to degradation of its habitats in the area.

In February 2016, avid birdwatcher Sumant Rajguru observed two Indian Skimmers flying upstream in the Mahanadi at Munduli barrage. Repeated visits revealed increasing numbers that had inhabited a sand-bed in the river. He noticed that some birds were moving away from the congregation in pairs and assumed that the birds were probably displaying breeding behavior. He informed Panchami Manoo Ukil, Subhendu Bhattacharya, Umakanta Biswal, Avinash Khemka, Sudhanya Rath and Siddhant Rajguru about these observations. Site visits revealed nest-making activities in the sand by a few pairs over the next 10 days.

On 22nd March 2016, Sumant Rajguru and Panchami Manoo Ukil came across a nest scrape in the sand-bed, at very close proximity to the water, with a clutch of 3 eggs. Repeated visits revealed more nesting activity and by 29th March 2016, a major part of the congregation was observed to be in nesting mode on the sand bed, as is typical of birds that breed in colonies. Indian Skimmer pairs have also been observed to be wetting their bellies and then sitting on the nest scrapes, probably cooling the eggs in the scorching heat of 41 degrees. Mating of pairs has also been observed. Adequate documentation of all ongoing behaviours of the birds has been made.

Sumant Rajguru & Panchami Manoo Ukil have informed the PCCF/CWLW of Odisha regarding this extremely significant development and all supporting documentation has been submitted. The DFO of the area has also been shown the site so that adequate measures are taken to safeguard the habitat to facilitate hatching of eggs without interference by humans and cattle. Site-conservation in this case is especially crucial in the light of the fact that not only is the Indian Skimmer nesting at this site but the site also carries nests of the Black-bellied Tern (Endangered) and River Tern (Near Threatened), both of which have been documented.

The Indian Skimmer is under several conservation threats. Although it is legally protected under the Indian Wildlife (Protection) Act 1972, its habitat of large rivers in northern and central India is under heavy anthropogenic pressures. In Odisha there is a need to survey all the larger rivers during April-May(breeding season) to find out its distribution and status. (Rahmani & Nair, 2016)

This finding of nesting Indian Skimmers, Black-bellied Terns and River Terns at Munduli merits highest conservation efforts at all levels so that adequate steps are taken to enable increase in numbers of these fast-depleting species.