In a set of developments that have unfolded with unprecedented speed and uncharacteristic coordination in recent months, the Ministry of Environment, Forests and Climate Change (MoEFCC) has cleared the first hurdle for Niti Aayog’s mega development plan for Great Nicobar Island. In two meetings held in quick succession in March and April earlier this year, MoEFCC’s Environment Appraisal Committee (EAC) Infrastructure – 1 “recommended” the project “for grant of terms of reference (TOR)” for undertaking environmental impact assessment (EIA) studies, which in the first instance will include baseline studies to be conducted over a period of only three months. 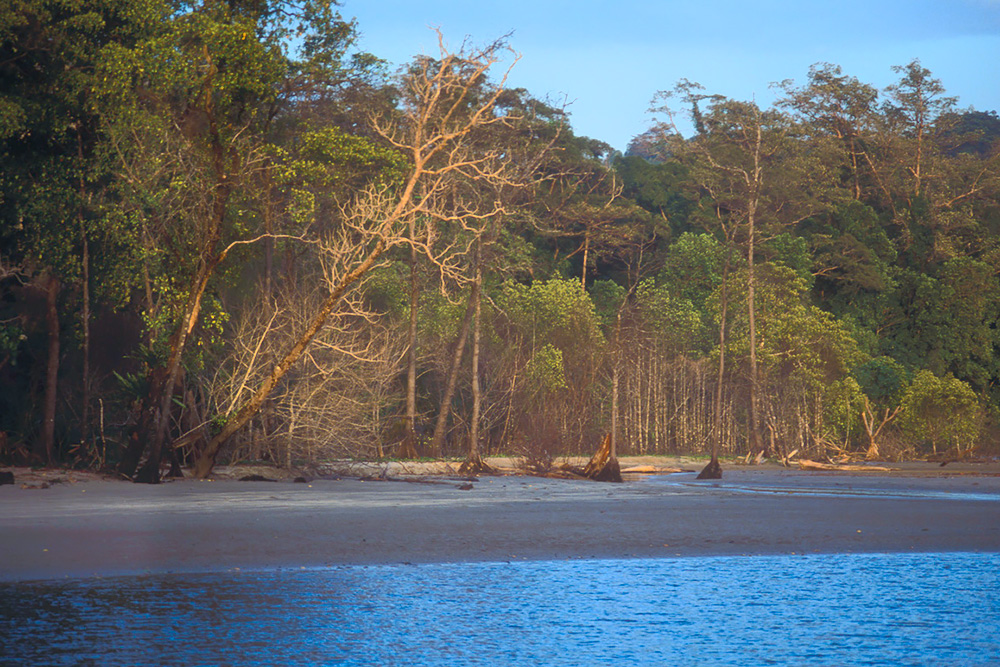 The fantastic tropical rainforests of Greater Nicobar. The Environment Appraisal Committee which flagged concerns over the development plan of the island has now ‘recommended’ it ‘for grant of terms of reference’ for EIA studies. Image © Pankaj Sekhsaria.

Documents available from MoEFCC’s Parivesh portal show that the 15 member committee headed by marine biologist and former director, Bombay Natural History Society, Deepak Apte, was responding to the 126 page ‘pre-feasibility’ report titled ‘Holistic Development of Great Nicobar Island at Andaman and Nicobar Islands’ prepared for the Niti Aayog by the Gurugram based consulting agency AECOM India Private Limited. The proposal which comprises a international container transhipment terminal, a greenfield international airport, a power plant and a township complex will cover an area of 166 sq kms, (mainly pristine coastal systems and tropical forests), is estimated to cost a whopping Rs. 75,000 crores.

One key concern is the proposed site of the port project, the centrepiece of the Niti Aayog proposal. The AECOM report has suggested that Galathea Bay along the South-East coast of the island is most suitable in terms of technical and economic feasibility. There is virtually no acknowledgement here that this is, by far, the most iconic nesting site in India of the enigmatic Giant Leatherback (Dermochelys coriacea), the world’s largest marine turtle – a fact confirmed by surveys carried out over three decades by the Andaman and Nicobar Forest Department and research agencies like the Andaman and Nicobar Environment Team, Dakshin Foundation and the Indian Institute of Science (IISc). The bay is named after Galathea river which empties into the sea here and the extensive beach is regularly used by Leatherbacks, Olive Ridleys and Hawksbill for nesting. The area has rich mangroves and associated fauna like crocodiles. The adjoining coastal forests are nesting grounds of the endemic Nicobar megapode besides supporting a diverse range of biodiversity, a lot of which remains unrecorded and unstudied.

What is striking is the significant changes made to legal framework – mainly to the Wildlife Protection Act –  to allow for situating the port here. The Galathea Bay was declared a wildlife sanctuary in the late 1990s precisely for the reasons mentioned above. It is even listed as one of the most ‘Important Coastal and Marine Biodiversity Areas’ and ‘Important Marine Turtle Habitats’ in India as per MoEFCC’s recently released ‘National Marine Turtle Action Plan’. It is also included in ‘Coastal Regulation Zone (CRZ) -I.

None of this seemed to matter to the Standing Committee of the National Board for Wild Life, which in its meeting on 5th January 2021 denotified the entire Galathea Bay Wildlife Sanctuary on the explicit grounds that the Niti Aayog had proposed a port here. It is, experts have argued, in violation of both the letter and the spirit of the WLPA – it is not even in the jurisdiction of the Standing Committee to decide upon, they say.

Then on 18th of January another MoEFCC expert committee approved a “zero extent” ESZ for the adjoining Galathea NP to allow use of land in the south-eastern and south-western part of the island for the Niti Aayog plan. The October 2020 draft  notification for this zero extent ESZ had ironically listed out in great detail the park’s ecological uniqueness – that it is part of an UNESCO World Heritage Site, houses a range of forest types, has one of the best preserved tropical rainforests in the world, is home to 648 species of flora and also hosts 330 species of fauna including rare and endemic ones such as the Nicobar wild pig, Nicobar tree shrew, the Great Nicobar crested serpent eagle, Nicobar paradise flycatcher and the Nicobar megapode. It also notes that the park is home to the indigenous Shompen community.

The notification says that an ESZ is needed to protect the park from an ecological, environmental and biodiversity point of view and goes on in the very next para to propose a zero extent ESZ for nearly 70% of the periphery of the park. It is almost as if the huge and unique diversity of life just listed suddenly stopped existing because of an arbitrary line drawn to allow a slew of high value projects.

In his 2007 study of the Nicobar megapode, K Sivakumar of the Wildlife Institute of India documented 90% of this ground nesting birds’ nests to be within a distance of 30 m from the shore. He notes, in fact, that the existing protected area network in Great Nicobar is not designed for the protection of the megapode and goes on to recommend that the entire west and southern coast of Great Nicobar – precisely the area now being made available for the Niti Aayog proposals – be protected for the megapode and other wildlife like nesting marine turtles. This is also in stark contrast to the current move to create a zero extent ESZ for the Galathea National Park.

Concerns have also been expressed on the impact of this mega project on Great Nicobar’s original human community – the Shompen. Project areas are important foraging grounds for this hunter-gatherer nomadic community and it can only be considered prescient that the official Shompen Policy of 2015 had specifically noted that the welfare and integrity of the Shompen should be given priority “with regard to large-scale development proposals in the future for Great Nicobar Island (such as transshipment port/container terminal etc.)”. This has been completely sidelined even as large areas of the island’s forests could become inaccessible and useless for the Shompen.

The AECOM report suggests that a total of 6.5 lakh people will inhabit Great Nicobar when the Niti Aayog proposal is implemented in its totality. This when the current population of Great Nicobar is a mere 8500 and the total population of the entire A&N island chain is less than 5 lakh people. One can only imagine the fate of the indigenous Shompen whose population is only a few 100. To say they will be swamped out of cultural and physical existence would only be a gross understatement. It is not even sure if the island has the carrying capacity with such a basic thing as fresh water availability and the resultant larger implication on the forests and interrelated ecosystems.

Available evidence also suggests that issues of the geological volatility of these islands are also not being factored in. The 26 December 2019 tender document by WAPCOS Limited for a ‘Traffic Study for Creating Transhipment port at South Bay, Great Nicobar Island’ justifies the port here, for instance, by noting that “the topography of the island is best suited, which has not been damaged much even by the tsunami on 26.11.2004 (sic)”.

There is nothing further from the truth. A 2005 Earthquake Engineering Research Institute (EERI) Special Earthquake Report by a multi-disciplinary team from the Indian Institute of Technology Kanpur, recorded witness accounts of 8 m high tsunami waves hitting the Great Nicobar coast on 26 December 2004. “The lighthouse at Indira Point, the southernmost tip of the Great Nicobar Island, which was on high ground before the earthquake,”the report notes further, “is now under water, indicating a land subsidence of about 3-4 m.” Megapode Island on the west coast of Great Nicobar actually disappeared as the land subsided and the island went completely under.Loss to life and property was limited because the Great Nicobar coast is largely uninhabited.

The Andaman and Nicobar Island system lies at a very fragile and vulnerable intersection of the geological, ecological and socio-cultural. Niti Aayog’s Great Nicobar plan is completely ignorant of these multiple realities even as it aggressively pursues a completely illusory agenda of economic growth and development. To go ahead with it will be to perpetuate a monumental folly the price paid for which cannot even be comprehended.

A Leatherback Turtle on Galathea beach 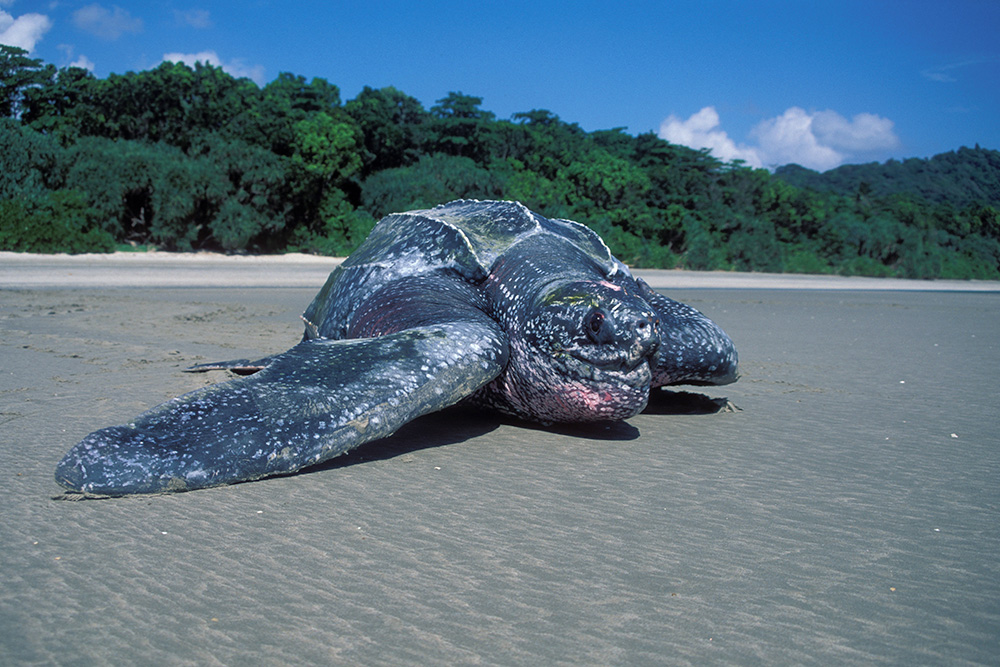 The Leatherback is the world's largest marine turtle and Galathea is a very important nesting site. 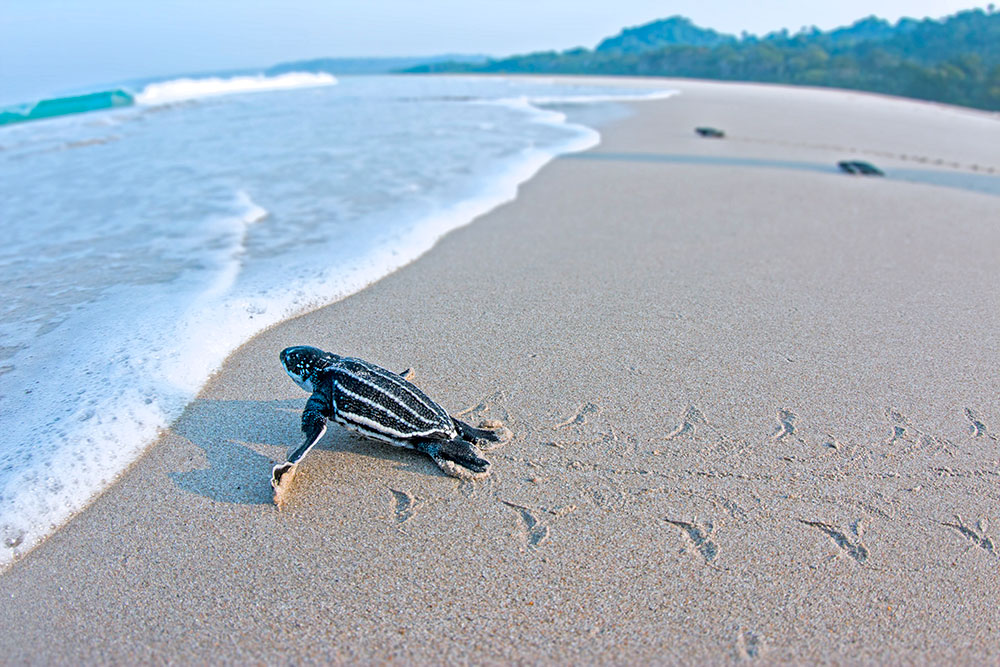