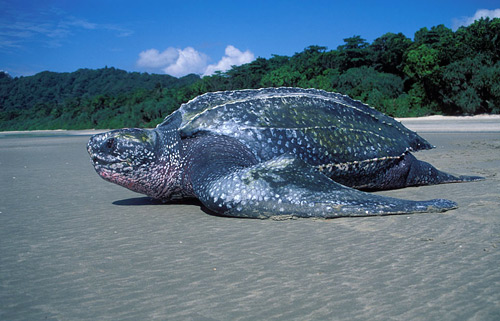 Kartik Shanker/Meera Anna Oommen
Leatherbacks are the largest of living sea turtles, growing up to 2 metres and weighing as much as 900 kg.

The Leatherback Turtle (Dermochelys coriacea) is the only existing species of the family Dermochelyidae. They are the largest of living sea turtles, growing up to 2 metres and weighing as much as 900 kg. Guided by the earth’s geomagnetic field to navigate, leatherback turtles can migrate more than 10,000 kilometres across oceans from breeding to feeding grounds. Unlike other marine turtles, leatherbacks can regulate their body temperature by a combination of their large size, insulation, and a blood circulation mechanism, known as a counter current heat exchanger, found at the junction of the flippers and the body, enabling them to maintain a core body temperature higher than the surrounding water. This adaptation combined with other physiological adaptations enable leatherbacks to dive deep into cold anaerobic waters (as deep as 1200 metres) and range into sub-arctic waters making them the most widely ranging among sea turtles.

Leatherback turtles are adapted to a diet predominated by soft-bodied animals like the hydromedusae. Their jaws are armed with two tooth-like projections on the upper that interlock with a single “tooth” on the lower mandible and the long esophagus posses backward-pointing spines that help the animal swallow the hydromedusae. Migration patterns of leatherback turtles seem to follow thermal fronts and oceanic gyres, seeking areas of high productivity for soft-bodied invertebrates.

Leatherback sea turtles nest at intervals of 2 to 3 years. They nest between 3 to 7 times per season, with an average of 9 – 16 days between each nesting. Each nest contains an average of 80- 100 eggs. Eggs incubate for about 60 – 65 days before the hatchlings emerge. Like all sea turtles, the hatchling sex is determined by the incubation temperature.

There are records of species having nested on the east and west coasts of mainland India up to the late 1960s. But current nesting populations are entirely restricted to the Andaman and Nicobar islands. Surveys of the Andaman and Nicobar Islands conducted by Satish Bhaskar, a pioneer of sea turtle research in India, in the 1970s, revealed significant leatherback nesting beaches on Great Nicobar Island. Subsequent surveys by revealed that there were many leatherback nesting beaches in the Little Nicobar Island, each with several hundreds of nests per season. This nesting population of the Nicobars is now considered to be the largest population in the southern Asian region. These nesting beaches were devastated during the December 2004 Indian Ocean tsunami and there is little information on the post-tsunami status of these nesting sites. We also do not have any information about where the leatherback turtles of the region go once they have finished nesting.

In 2008, the Centre for Ecological Sciences, Indian Institute of Science (IISc), Bangalore initiated a long-term tagging and monitoring programme on Little Andaman Island in collaboration with the Andaman and Nicobar Environment Team (ANET) and the Andaman and Nicobar Forest Department. Monitoring of the nesting sites (South and West Bay) reveals that significant nesting has recommenced in these nesting sites. A survey of the Great Nicobar Island by two of the team members (Naveen Namboothri and Saw Agu) indicate that the nesting beaches are forming again, and a fair amount of nesting occurs at these beaches now. In January 2011, the team tagged three leatherback turtles (numbered 103333; 103334 and 103335) with satellite transmitters to track the post-nesting movements of these animals. This study is funded by the Space Technology Cell at IISc, and is the first telemetry study of leatherback turtles in South Asia region.

The transmitters were attached to the leatherbacks surgically through the carapace ridge (without entering the body cavity) with metal wires covered by sterilized tubing. The wires are clamped together by a corrodible clamp which holds the wires in place for a period of time, and the clamps eventually corrode, releasing the transmitter. The transmitter has an inbuilt salt-water switch that automatically turns on when the turtle surfaces, sending signals of its location. When a signal is transmitted, it is received by satellites which help to provide a location for the animal. The data is received by a company called ARGOS whose equipment is aboard polar orbiting satellites of the National Oceanic and Atmospheric Administration, USA. Data are transmitted or can be downloaded on a daily basis.

The data has revealed that the turtles initially spent considerable amount of time around the nesting site. Initial results show 103335 and 103333 swimming directly southwards in the Indian Ocean. Turtle 103335 swam approximately 2500 km and is currently south of Sumatra near the Cocos (Keeling) Islands, and appears to be swimming towards Australia. Unfortunately, two PTTs have stopped sending signals (103334 since 14/03/2011 and 103335 from 3/04/2011). 103335 swam a distance of about 4500 kms in approximately 2 months and was last recorded close to the Cocos (Keeling) Island. 103334 travelled in a predominantly south west direction and was the first to stop sending signals. 103333 was the last to move away from the nesting site locality and the most recent data was received from south of to Flores Island (south east Indonesia) having traveled approximately 4000 kilometres.

The leatherback turtle nesting beaches in the Andaman and Nicobar are comparatively better protected due to their remoteness. Depredation of eggs by monitor lizards, feral dogs and pigs are threats on land, while interaction with fisheries seems to be the important threat at sea. Poor coastal management may also lead to the loss of habitats through erosion. In addition, the impact of climate change on coastal habitats as well as directly on sea turtle populations through the effect on sex ratios, has not yet been fully understood. Ongoing studies using genetics and telemetry will provide insights into the biology of these animals which will help in their conservation. 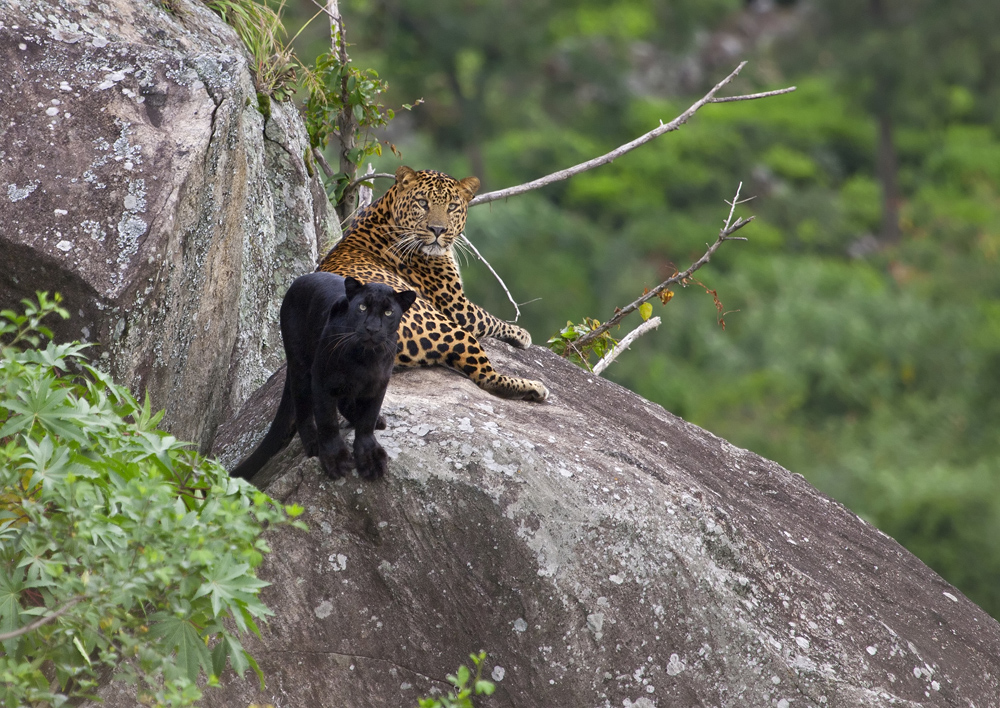