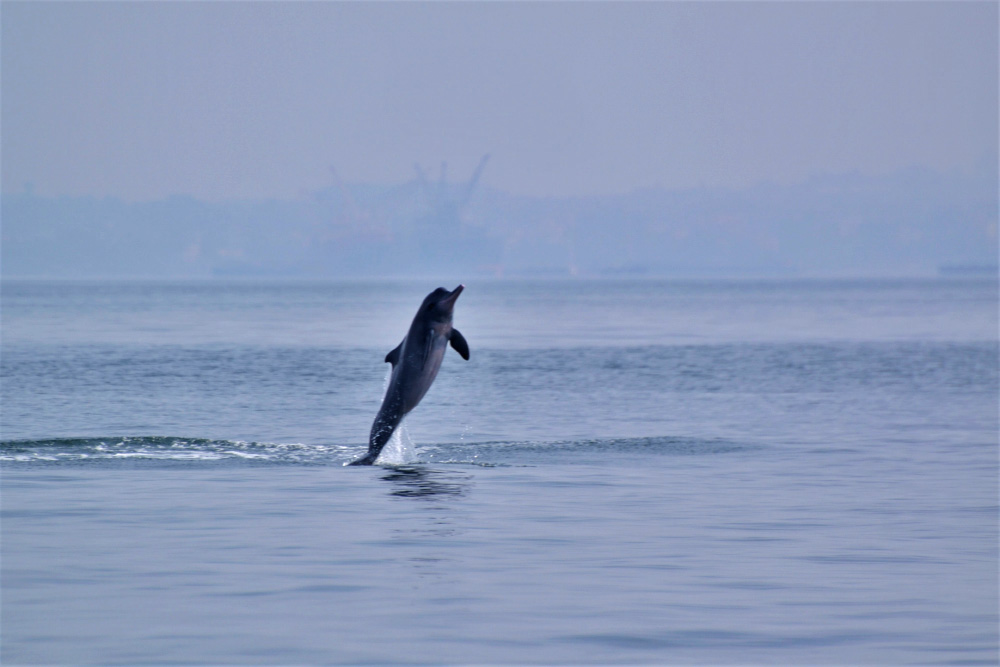 Abhishek Jamalabad
A young humpback dolphin leaping, with Mormugao Port in the background. The port project's proponents deny the presence of dolphins in this area.

Skipping the Important Details — What About Mormugao’s Marine Mammals?

The coast of Goa has a rich variety of coastal and marine habitats which, besides supporting a lot of biodiversity, also sustains the tourism industry that forms the state’s economic backbone. All of this is now on the verge of destruction, with the latest developments proposed by the Mormugao Port Trust (MPT), in association with Jindal SWPL, Adani and Vedanta.

This plan, to expand the port and develop a large coal shipping hub (meant to bring in as much as 50 million tonnes of coal over the next decade), has already raised a lot of concern among people in the locality and all over Goa, who raised their voices in a Public Hearing that extended from the planned 3 days to a total of 8 days. These included residents, fisherfolk, businessmen, students, politicians, lawyers and scientists. Among all the concerns raised, most of which have simply been ignored by the project proponents in their bid to push through, are matters of serious ecological importance, including issues pertaining to protected marine mammals. As independent researchers who have on multiple occasions studied the marine mammals inhabiting this region, we proceed to point out the potential impacts the project’s EIA report appears to have overlooked, and also point out some omitted/overlooked facts (in greater detail in the attached PDF note). A map depicting recent marine records in the vicinity of the proposed project site. Map © The Konkan Cetacean Research Team; data from authors’ and contributors’ personal observations, and from other independent observers.

Dredging of the port’s approach channel, to suit larger ships, is one of the activities proposed under this project. The EIA only mentions the very direct, short-term, casualty-inducing effects of dredging on dolphins. It makes no mention of the longer-term indirect impacts on dolphins and other marine mammals.

A 2013 case study in Scotland showed clearly that bottlenose dolphins (Tursiops truncatus) reduced their usage of a foraging area as a result of dredging operations, even though these dolphins were used to the urbanisation and modification of the area prior to the dredging. Indian humpback dolphins (Sousa plumbea), the species in Mormugao, are similar to bottlenose dolphins in their usage of human-modified habitats. Both species are fairly adaptable. Going by the Scotland case study, it is possible that the proposed project here would be a threat in this regard to the local humpback dolphins, which are a protected species under the Wildlife Protection Act, 1972. Furthermore, humpback dolphins are strictly near-shore species that prefer to forage near river mouths. They are not capable of simply moving out further offshore when disturbed. Continuing under the assumption that they will do so is baseless, and goes against the protection this species is legally afforded.

The sound produced by dredging is another matter of concern. The EIA does make a mention of it, but the project’s proponents do not seem to be concerned by this. The sounds known to be produced by the types of dredgers to be used here (as per the EIA) reach levels of at least 186dB (approximately equivalent to 160dB in air) – louder than fireworks at the source, and even louder than a jet taking off. What makes it even more serious is that this sound is concentrated in a low frequency band that overlaps with the frequency ranges used by whales, and even fish for communication. The low frequency quality also lets these sounds travel far beyond the site of operation, meaning it could affect a lot more aquatic fauna than can be accounted for. Porpoises are not known to use these low frequencies, but a 2010 study found harbour porpoises avoiding dredgers from as far as 600m. A protected species of porpoise, the finless porpoise (Neophocaena phocaenoides) is found in the waters in and around Mormugao – we have sighted it on our own surveys in the area supported by the State Forest Department. This species is elusive and hard to study, but its low tolerance of human intereference suggest that it is very likely at risk from the proposed developments.

Lastly, we wish to draw attention particularly to the MPT’s outright denial of the presence of protected marine species in the area. In response to a question raised by a citizen at the public hearing on 3rd May 2017, the MPT stated that “no dolphins had ever been sighted in the port area”. We have well-documented records of Indian humpback dolphins foraging and socialising within the docking area of the port. There are published and publicly accessible records of marine mammals from the immediate vicinity of the port area, including not just Indian humpback dolphins, but also finless porpoises, and killer whales (Orcinus orca). A very rare record of a humpback whale (Megaptera novaeangliae) was made in March 2017 at the nearby Grande Island, which falls within the EIA’s study radius. All of these cetaceans are protected under the WPA. (We provide herewith a map of these sightings along with a few images, and further details about these data & sources in the attached PDF note). Additionally, another protected species, the whale shark (Rhincodon typus) was sighted and filmed at Grande in April 2017.

All of the above – including gaps in the existing EIA, and the dismissal of questions raised during public hearings – demonstrate the apathetic approach of the project’s proponents towards matters of serious ecological concern. We strongly believe that given these issues, along with concerns over countless other ecological, environmental, economic, and livelihood impacts (all of which have been rightly raised by individuals and local communities), the project has no basis on which to receive clearance to proceed in this region.