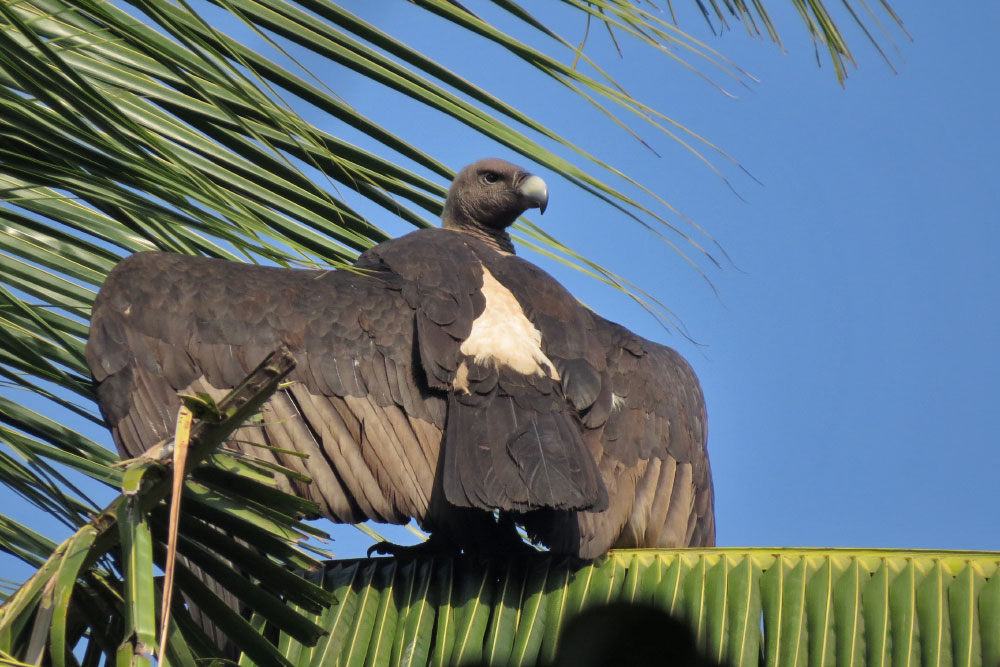 Once the most common large raptor in the subcontinent, the white-rumped vulture (Gyps bengalensis) has undergone a 99.7% decline over its home range. One of four vultures listed as Critically Endangered on the IUCN Red List of threatened species, this vulture is now regionally extinct in China, Myanmar, and Bangladesh.

The decline of this species in India was first noticed in Keoladeo National Park, and a country-wide population decline was noted between 2000-2007.

The widespread decline of vultures across South and Southeast Asia can be attributed to one main cause: the prolific use of the anti-inflammatory drug, Diclofenac, in treating livestock. This is a classified, non-steroidal anti-inflammatory drug (NSAID), which was cheap and widely available until its ban in 2006 due to its fatal effect on vultures.

Vultures are particularly vulnerable to poisoning from toxic substances due to their foraging behavior. First, multiple vultures feed at a single carcass, causing large numbers of the species to be poisoned at a time if Diclofenac is present in the tissue of the carcass. Second, as vultures have a long lifespan and are at the top of the food chain, they are placed at a great risk of biomagnification1. Vultures are also exposed to a higher concentration of contaminants as they feed on carcasses and/or waste products. Thus, while their role in nature is vital to maintaining the ecological balance, their very ecology is pushing several species further towards extinction.

Why do we care about vultures?

The drastic decline in India’s vulture population poses a grave hazard to public health. A lack of vultures increases the number of decomposing carcasses, leading to an increase in disease spread by parasites, flies, and ticks, as well as airborne diseases. Another consequence is the spread of rabies due to the increase in feral dog populations, which are thriving on the carcasses that used to be consumed by vultures.

From 1993 to 2006, indirect health costs due to vulture declines approximated $34 billion (Wildscreen; Arkive, 2005). Firstly, the reduction in vultures encourages feral dog populations that are attracted to carrion, as both species compete for easily obtained freshly dead meat. One vulture consumes approximately 0.5 kg meat/day while a dog can consume about 5.0 kg meat/week. By this calculation, the loss of one vulture would increase food availability for 0.7 dogs. Feral dogs have increased India’s rabies incidence rate to the highest in the world – 60% of all globally-documented cases. Of the 20,000 rabies cases recorded annually in India, 96% are from feral dog bites (Markandya et al., 2008).

The Road to Recovery

Medical research has found an alternative drug to Diclofenac – Meloxicam, which has been tested with limited side effects on livestock. Above-natural doses of Meloxicam, when administered to vultures, were found to have no detrimental effect, making it a viable alternative in veterinary medicine. The one limitation is the higher production cost, which makes it less accessible to rural farmers; but with further research, Meloxicam might soon become more accessible to farmers and cattle herders.

After the 2008 ban on Diclofenac in veterinary medicine, a 2015 survey across India revealed about 6,000 white-rumped vultures, 12,000 long-billed vultures, and 1,000 slender-billed vultures in the wild. In 2004, the Bombay Natural History Society (BNHS) started a vulture breeding and care centre at Pinjore, Haryana. There are now nine such centres across India, of which three are directly managed by the BNHS. Their primary purpose is to look after vultures, breed them in captivity, and eventually release them into the wild. According to BNHS Deputy Director, Dr. Vibhu Prakash, the first objective of the programme was to produce a few hundred breeding pairs of the three endangered vulture species.

The work of Chris Bowden and his initiative Saving Asia’s Vultures from Extinction (SAVE) has also played a large role in bringing these scavengers back from the brink. SAVE is a consortium of 24 partner organizations working together to bring vultures back in the wild. Efforts by this organization include research into the causes of vulture declines, alternatives to Diclofenac, local causes of vulture disappearance, and the setting-up of vulture breeding and care centres, like those run by the BNHS.

These measures seem to be making an impact and, if vulture conservation is made more of a priority, we can hope to see these winged wonders more commonly once again across India.

Disclaimer: The views or opinions expressed in this article are those of the author and not of any affiliated institution or organization.


Priya is a landscape ecologist and geologist working with the Ashoka Trust for Research in Ecology (ATREE) and the Environment (ATREE), Bangalore, on wetland conservation and ecosystem services.