Oil Palm Should not be Expanded in Arunachal Pradesh 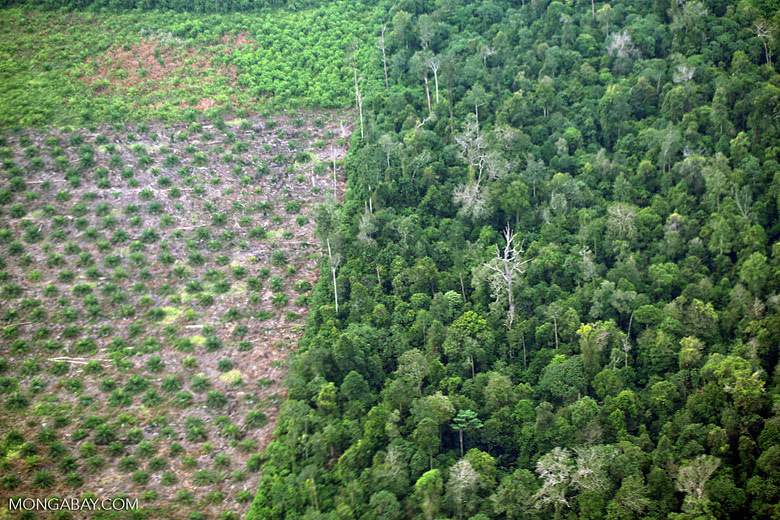 Mongabay / Rhett A. Butler
Palm oil production is the largest cause of deforestation of huge swaths of biodiversity-rich rainforests in many equatorial countries.
Oil palm plantation in Mizoram, India 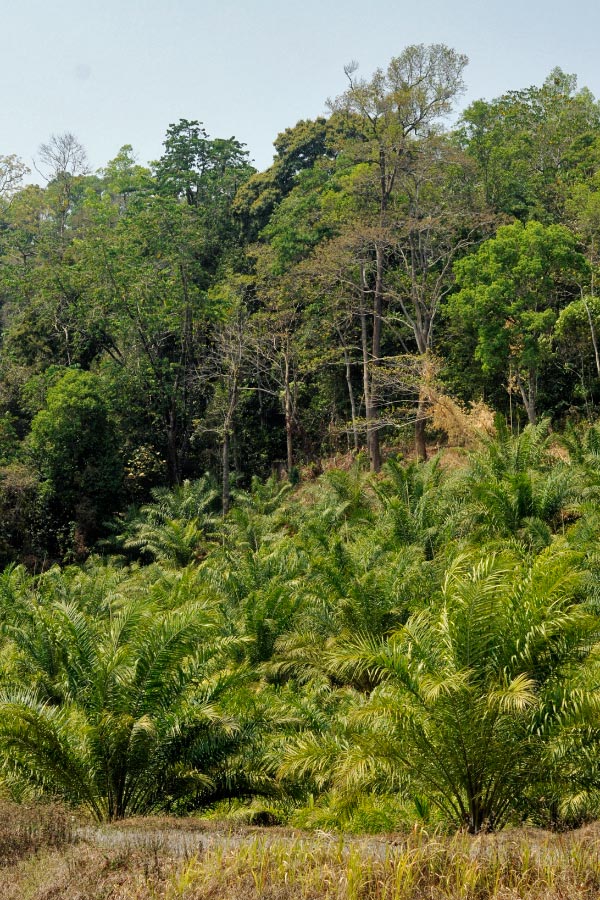 TR Shankar Raman
In the Northeast, oil palm is replacing secondary and mature forest on slopes and rice cultivation in the valleys.

Arunachal Pradesh has recently signed a memorandum of understanding with Ruchi Soya Industries to plant 25,000 hectares of oil palm in four districts – East Kameng, Papumpare, Lower Subansiri and West Siang. This brings the total area earmarked for oil palm in the state to 45,000 hectares (or 450 sq. km.). Oil palm is a highly productive crop – more than any other oil crop in the world – yielding up to 6 tons of palm oil per hectare of cultivation. Palm oil is also the cheapest vegetable oil in the world, and is used extensively for cooking and the production of consumer goods like cosmetics and soap. As such, expanding oil palm cultivation in India will be important for India’s vegetable oil security.

Oil palm plantations will have to replace other forms of land use in Arunachal Pradesh. A majority of Arunachal’s lands are community-managed Unclassified State Forests (USF). Sixty two percent of Arunachal’s forest cover consists of USFs. Therefore, unlike replacing other crops in the rest of India, oil palm will replace USFs in Arunachal Pradesh (and the rest of northeast India). Oil palm expansion has already led to massive deforestation, especially in Indonesia and Malaysia. Scientific studies have shown that in Malaysia, at least 16% of forest loss between 1990 and 2005 has been because of oilpalm, and 55% of oil palm plantations have been established by clearing primary forest. In Arunachal, USFs provide important products and services to entire tribal communities, including timber, bamboo, medicinal plants, and clean water and air. Also, a significant part of these forests are used for shifting cultivation (or jhum) by most Arunachali people. Unlike oil palm, jhum uses “natural cycles of forest regeneration” to cultivate of multiple crops that can provide a balanced diet, without polluting chemical inputs. Replacing these forests with oil palm will mean the outright loss of all these benefits for the people of Arunachal.

A further concern is that the benefits of oil palm cultivation will be shared by few, while the costs will be borne by many. For example, lands owned by tribal councils in many countries (like Indonesia and Papua New Guinea) have been sold illegally to “people with no customary birthrights” to set up company-owned oil palm plantations without consensus by the overall community. As a study by Curry and Koczberski in Papua New Guinea shows: “Many outsiders acquiring land in this way believe that the cash payments give them ‘ownership’ of the land in the sense that their children can inherit the block or they can sell it on to a third party. This is often not the view of the customary landowning group…”. These lands and their profits were then controlled by a few, powerful, people allied with oil palm companies. In southeast Asia, tribal leaders have been bribed by industry agents to sign over community owned lands to oil palm companies. A similar situation is already occurring in Mizoram, and can easily be repeated in Arunachal Pradesh without appropriate checks and safeguards, and true grassroots, democratic, decision-making. The fallouts of unsustainable and indiscriminate oil palm expansion at the cost of forests have been extremely detrimental to people in southeast Asia – Indonesia and Malaysia are reeling from the effects of massive forest fires, soil erosion, air pollution and declining water quality.

Finally, Arunachal Pradesh’s forests (including USFs) have the second highest number of plant, bird and animal species in the world, and new species of plants and animals continue to be discovered. In fact, the first bird species to be discovered in India after independence (the Bugun Liocichla), was discovered in West Kameng district in 2006, and named after the Bugun tribe. This bird species was described from community-managed forests (USF) highlighting the importance of such forests for biodiversity and people. Just like this forest which has becoming an international bird watching destination, bird and wildlife-based tourism in many of Arunachal’s forests can provide communities with a source of income which will disappear if these forests are converted to oil palm plantations. The Arunachali people have much to gain from protecting their forests. These forests are the cornerstone of their society and culture, provide various materials and benefits, and are becoming increasingly crucial as safe havens for globally important species and economic livelihoods. Oil palm expansion in Arunachal Pradesh must be a consultative process involving the public, with the dangers and potential risks of this expansion made explicit in arriving at local-scale policy decisions.


Dr. Umesh Srinivasan is a medical doctor and a conservation biologist working in Arunachal Pradesh for the last decade.