No Two-bit Crime This 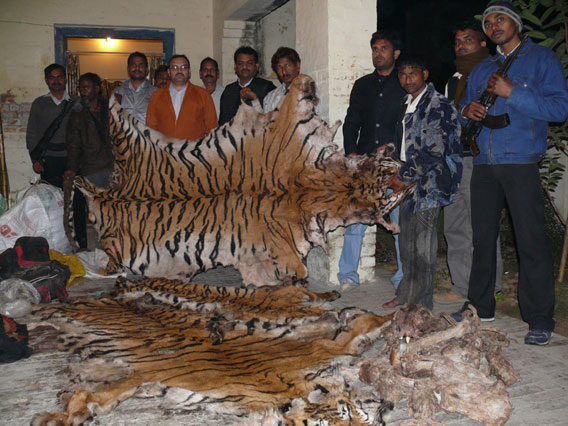 Belinda Wright / WPSI
Belinda Wright, executive director, WPSI, says that in the last 15-years, out of 691 cases of crimes against tigers filed in Indian courts, only 10 cases have resulted in conviction

Belinda Wright has been crunching some numbers: between 1994 and 2009, out of 691 cases of crimes against tigers filed in Indian courts, 10 cases have resulted in conviction of a total of 30 persons.

“Statistics are so important to get the bigger picture,” says the 57-year-old wildlife conservationist and executive director of Wildlife Protection Society of India or WPSI, an NGO.

Interpol estimates global illegal trade in wildlife products is worth around $20 billion. “It is significant that the Central Bureau of Investigation (CBI) views wildlife crimes as a form of economic offences,” says Samir Sinha, head of wildlife trade monitoring body TRAFFIC India, and a forest officer of the Uttaranchal cadre, who has previously worked in the Corbett and Rajaji national parks.

Animal parts reportedly go for at least $20 for every 10 gm. “Poachers are no longer making a petty few thousands, they stand to gain in lakhs for a skin in good condition,” discloses Wright. That the conviction rate for wildlife crimes is less than 2% in India, identified as an important source market for these products by international policing agency Interpol, is not least on account of the many challenges of gathering evidence and of getting a conviction.

Not surprisingly then, the Supreme Court judgment on October 20 declining wildlife trader Sansar Chand’s special leave petition has given both government probe agencies and wildlife protection NGOs something to cheer about. Wildlife Crime Control Bureau (WCCB) additional director Rina Mitra, who has six years’ experience in the CBI, sees the judgment as a shot in the arm for law enforcers. “The court gave a beautiful judgment,” she says.

The apex court in its judgment had said: “…persons like the appellant are the head of a gang of criminals who do illegal trade in wildlife. They themselves do not do poaching, but they hire persons to do the work of poaching. Thus a person like the appellant herein remains behind the scene, and for this reason it is not possible to get direct evidence against him.”

A key element in Chand’s conviction had been the extra-judicial confession of co-accused Balwan, who had been caught ferrying two leopard skins from Rajasthan to Delhi by train. The Supreme Court not only admitted Balwan’s confession implicating Chand as evidence, but explained that the appellant’s track record also weighed against him. Chand was previously convicted in 1982 and is alleged to be involved in 57 other cases of poaching and trading in endangered animal products.

“India is not a major market for tiger parts. There is minimal demand for use in some tantric rituals,” says Wright. China and Tibet, where these parts and skins are used in medicines, garments, and increasingly as gifts, have been identified as the key markets for big cat products.

Sinha says that while tiger and leopard parts are not much in demand in India, with growing affluence people are now getting interested in buying exotic species, including wild birds and monkeys as pets. “Marmoset monkeys stolen from the Kolkata zoo in August 2009 were recovered from a farmhouse in Chhattisgarh,” he says, adding, “They were originally thought to have been taken out of the country, but they were found right here.”

In yet another case, a matchstick box by an obscure regional manufacturer and DNA match for lions’ blood gathered from nail clippings helped the then Gujarat inspector general of police Keshav Kumar solve the case of ten Asiatic lions killed in the protected Gir forest in 2007. Though there was precious little to connect the poaching incident with the notorious Bahelia tribe of central India, Kumar narrowed his search to Madhya Pradesh based on a matchbox branded Chameli, and within two years, further narrowed it down to 16 persons whose nail clippings tested positive for lions’ blood in a forensics test. What also helped authorities narrow down their search to Madhya Pradesh was a tip from WPSI—the modus operandi of the lion poachers in Gir bore an uncanny resemblance to that observed among tiger poachers in the central Indian state. Kumar is now working with the CBI.

In mid-August, WCCB recovered a Puma skin being moved through the Kolkata foreign post office. “We had information that the skin of an endangered wild animal was being transported through the postal system,” explains Mitra. At the Kolkata post office, WCCB officials opened the courier declared as carrying a rug from the United States to find instead the full skin of an animal of the big cat family. The trophy is suspected to be that of a puma concolor cougar, a species under Appendix I of the Convention on International Trade in Endangered Species, or CITES. The crime bureau is closely watching the postal services now, Mitra adds.