Living with Leopards Outside Protected Areas in India

Vidya Athreya | The Pioneer
Villagers attacking a leopard near Ranthambore 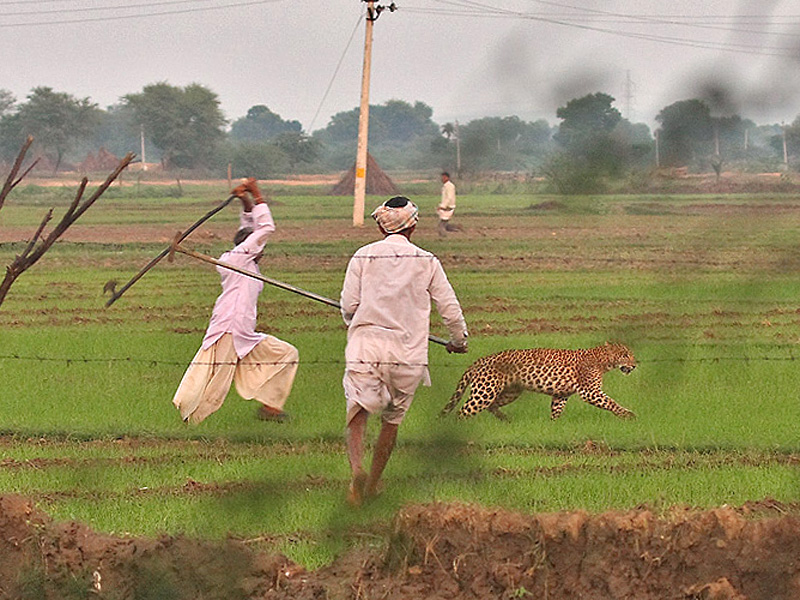 This article was first published in The Pioneer on August 11, 2012 with the title ‘Leopards are shy, not aggressive’. It is being reproduced here with permission from the author.

Our idea of wildlife often does not match what it really is. Perhaps it stems from the holiday tours to the forests where we go to enjoy the weekend. From our homes in the concrete jungles we check into comfortable, plush resorts in the midst of verdant surrounding. Welcomed with a drink, comfortable beds, air humming in through conditioners, a joy ride through different shades of greens and browns, a few tiger sightings, the sun going down and we are back for a buffet of food and drinks and sink into the clean starched bed. We are content and wonder at the beautiful land that is India. This way is indeed the best way to be with wildlife. Where you do not set foot upon their soil, where you see them from the comfort of a four wheeler, where you leave without a close contact and yet retain powerful memories to make you switch on the Natgeo channel the next time instead of a soap opera. Wildlife is fascinating, we need them, they relax us, are good for our soul; but perhaps only the urban soul.

To rural Indians wildlife takes on a darker shade of rosy, sometimes blood red. Various species of wild animals, from elephants, leopards to nilgai, damage their crops, eat their livestock while they try hard to make ends meet. These people view large wild animals not through the plasma TV screens glorified by Nat geo and Discovery but by sharing space with them. Rural Indians are aware of the wild animals among them; they see the mother hyaena walk by with her three cubs, they see the leopard cubs in the sugarcane fields they are harvesting, they see the elephants breaking their houses. Yet they will not kill the animals, the reason being a mixture of the strict laws and the tolerance that is uniquely Indian. On the other hand, the urban Indian can barely accept the cows on the roads, which have a nasty habit of preventing their SUVs from picking up speed.

Although the problem might appear simple the consequences of urban people watching wildlife through a prism of their idea of wilderness and the rural people living with species like leopards, wolves and elephants in their backyard can be very grim. Decisions and policy are made by the urbanites and impact the people who share space with dangerous animals. Take the example of the leopard. All that we know about the leopard are mainly from two sources; the media and Jim Corbett. The former highlights the attacks on humans and/or attacks by humans on leopards. The latter is famous for killing man-eating leopards. And we know nothing more. Nor are we questioning what we know. We accept that Corbett was right and the general perception is that all leopards are aggressive, baying for human blood. But if you look for any ecological studies of leopards when they share spaces with humans, there have not been more than a couple. These are extremely secretive animals and therefore not as easy to study. One of the tools that allows us to better understand how they use space and time is by collaring them. While in Africa and other countries, hundreds of leopards and lions are collared and studied, in India this numbers is less than 10. What we do not know we will never understand. That most of the understanding is based on people’s opinion and not scientific facts can lead to management decisions that are dangerous to both, people and wildlife.

Leopards are actually very secretive and like all other wild animals go out of their way to avoid humans. The problem with leopards is that they are extremely versatile and can live close to humans. In the developed countries, mountain lions, bears, coyotes do the same and adapt to living in urban areas feeding on garbage and even pet food. In India wolves, leopards, hyaenas, foxes and jackals also do the same and share space with rural Indians. However, here the urban idea of wilderness, that leopards only occur in forests, sets in, and with most of our decision makers from urban India, the disconnect is real.

He/she is unlikely to know that human settlements are quite food-friendly to adaptable carnivores like the leopards. This is because of the extremely high numbers of livestock (cattle, goats, sheep) and domestic pets (dogs, cats) that are present in India and form food for the wild carnivores. Whenever a leopard is seen, even if it is placidly sitting on top of a tree, the tamasha starts, news reporters throng and the mob forms. A mob then cannot be controlled and, more often than not, the leopard in desperation tries to flee, injures a few humans, giving them the right to kill it. And all this is flashed on TV.

But leopards are in fact extremely shy animals, with their first instinct to avoid humans. Yet they do attack and prey on people, usually children. Although these attacks are extremely rare given the number of leopards present in the landscape, it is these that are highlighted and focused on by the media. After all, it makes a good story. However, this sensational reporting can do a lot of harm not only to the leopards but also to humans as we have seen. As more and more fear is generated, there is a greater demand to remove them. The Forest Department, under pressure, traps the animals and leaves them in a nearby forest. However this only worsens the problem because of the leopard’s biology. They are highly territorial animals, and adults will not leave their homes. If such an animal is trapped and settled even 400 km away, it tries to go back home, using new areas, using human dominated areas that it is not familiar with; and with more than 300 people/ km2 in India, chances for conflict can increase. Furthermore, it is often said that they need to be culled. However, recent studies find that removal of large cats by killing can also create problems because the vacant territories are swiftly colonised by younger animals who can move in from even 100 km away. And since they are new to the area, the problems can increase.

It should also be pointed out that a leopard mother spends a large part of her life taking care of and teaching her young. She accompanies them for 2.5 years and in a human-use landscape teaches them how to avoid humans, how to hunt etc. If such a mother is removed, the inexperienced sub-adult could create problems. Thus because of our lack of understanding of their society and biology, we can create a greater problem for us. In Maharashtra and Gujarat, attacks on humans occur near the release sites of leopards where they are trapped from human-use areas and released in forests.

Thus our problem seems to be rooted in our idea of wilderness, which is not the same as how leopards view the landscape. Further, because of our lack of knowledge about them — with about no more than a handful of studies carried out ever — we cannot deal with them appropriately. Like a friend remarked, we know more about the moon than about the leopards living in human settlements.

There are some simple things one can follow to minimise the losses we face to leopards when we live close to them.

In terms of a nation-wide policy, most of the focus, be it by the administration, the media or research is on protected areas. Although protected areas are extremely important, they have an entire army of people caring about their well being, and planning their management. In the case of wild animals that are long-ranging and use human use landscapes, such as, elephants, leopards, wolves, hyaenas, nilgai, wild boar, and primates, there is so little known about their ecology and behaviour when they are interacting with humans. The management is likely to be faulty because we are using opinion and not knowledge-based information to deal with wild animals outside. Thus lack of information seriously affects the welfare of humans sharing space with these animals. Furthermore, it erodes the tolerance rural Indians have towards wildlife. Nowhere else in the world do you see large density of humans and a diversity of large wild animals sharing space. If we do not see the need to increase our understanding and change the way we view these animals, not only this ancient part of our culture but even the welfare of the people who share space with these animals is compromised.

Please also see this article on Man-Leopard conflict by the author.