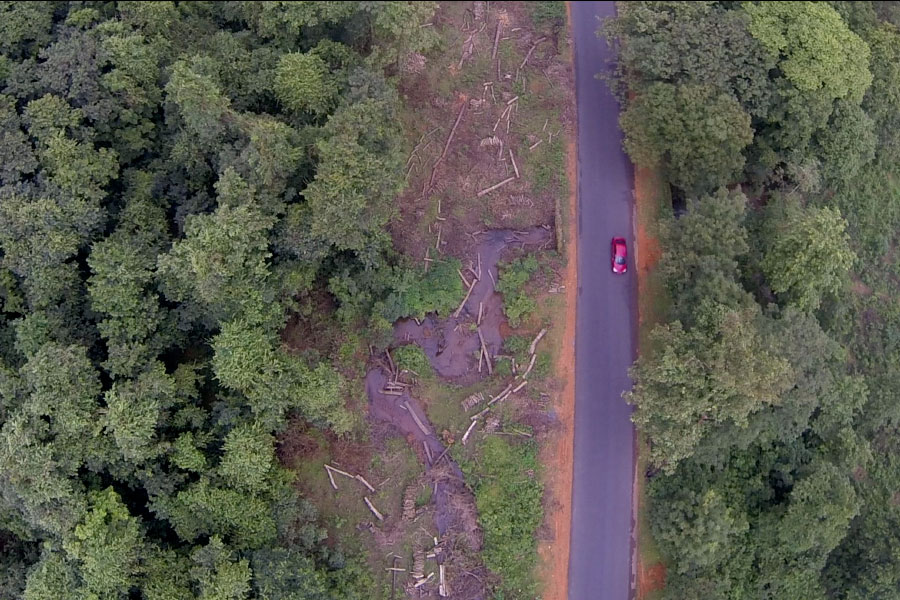 Prakash Matada
Large scale road building has caused massive deforestation and fragmentation in many of the world’s biodiversity hotspots.
An endangered Desert Cat run over by a speeding vehicle 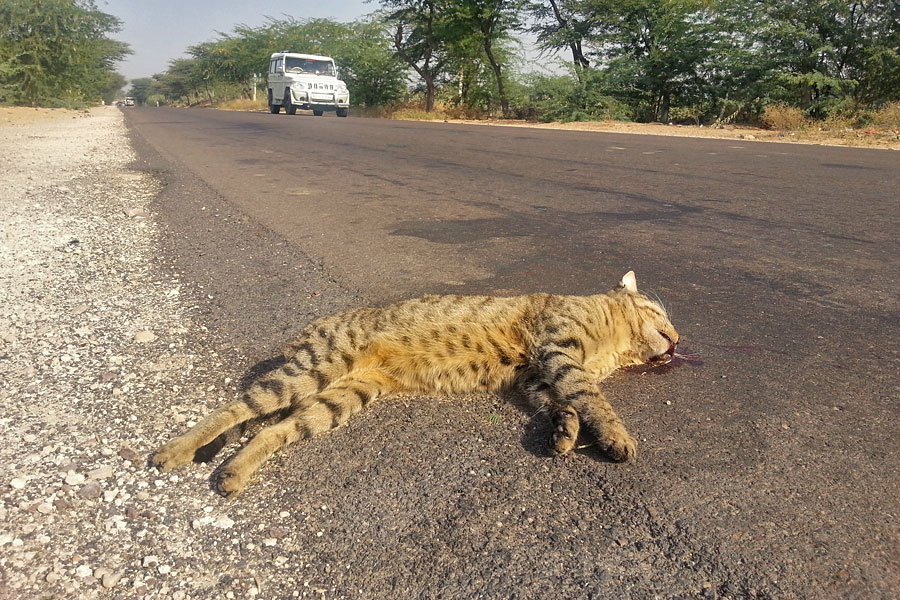 The ongoing controversy about widening National Highway 7 (NH7) has highlighted the inevitable trade-offs in conservation and development. Conservation groups and National Highways Authority of India (NHAI) have been at logger-heads. The former contend that widening the parts of NH7 that pass through Kanha and Pench Tiger Reserves will further fragment an important wildlife refuge and corridor. NHAI opposed the high costs of wildlife-friendly mitigation measures, and agreed to build underpasses and overlays only after the Supreme Court’s intervention. Nonetheless, they took exception to the intransigent stance of conservationists regarding a patch of forest when a vital national infrastructure needed improvement.

With the impetus for economic expansion, new roads are being made and older ones widened within ominously shrinking wild lands—including national parks and wildlife sanctuaries. A pervasive argument posited in favor of bullish road-building is that emerging economies such as ours cannot afford to debate ecological concerns. We must necessarily push ahead with development; costs can be paid later. In fact though, negative fallouts of ill-conceived roads have led many developed countries, which can financially afford damage control, to adopt more holistic evaluations of current and past road building (e.g Ament et al 2008). India would do well to learn from the infrastructure mistakes of richer countries, revealed only in the long-term (example).

Although we restrict the scope of this article to ecological concerns, it is pertinent to note that road building encompasses a gamut of issues ranging from health (e.g Herndon and Butler 2010), to socio-economic inequality (e.g Perz et al 2007). It is crucial therefore that the Indian government integrates expertise from interconnected domains such as conservation biology, sociology, and public health when planning road networks.

In conservation speak, roads are “linear intrusions”. Although appearing benign compared to large mines or dams, the total habitat lost or degraded over the entire stretch of linear intrusions can be substantial. Not surprisingly roads are a crucial factor contributing to habitat loss and land-use change (Laurance et al 2009). A large global body of research on “road ecology” has examined the detrimental aspects of road-building on animals, plants and entire ecosytems (Forman 2003).

From elephants to insects, the most obvious consequence of roads is the wildlife killed by vehicular traffic, often compounded by human negligence and lack of compliance with prescribed speed limits. Nocturnal animals including tigers and leopards are particularly vulnerable. While some animals are attracted to openings—making them susceptible to roadkill—other animals entirely avoid roads. Roads through wildlife corridors can pose barriers for animal movement, sometimes leading to population declines or localized extinctions even over short time scales (Laurance et al 2009).

Forests fragmented by edges additionally suffer changes in ecological and ecosystem process such as pollination, seed dispersal, and carbon storage (Laurance et al 2009). Such forests are susceptible to soil erosion and landslides, degrading soil quality, and depleting aquatic reservoirs and water catchments of rivers. A seemingly simple road can lead to complex changes in natural habitats!

The ill-effects of roads we outlined are neither novel nor unavailable in the public domain. Much of this information has been submitted to the government as comprehensive guidelines by the National Board for Wildlife (NBWL, Raman 2011). Further, these points have been raised during multiple project appraisals. Crucially, the Wildlife (Protection) Act, 1972, Forest (Conservation) Act, 1980 and Environment (Protection) Act, 1995 clearly place restrictions on roads through Protected Areas (hereafter PA) and other forests. Any road that could harm wildlife or its habitat needs clearance from the NBWL if within 10km of PA, National Tiger Conservation Authority (NTCA) for Tiger Reserves, or Forest Advisory Committee (FAC) for other forests.

A few best practices can go a long way in reconciling roads, indeed development in general, with conservation. Proponents of road-building must show why the proposed location is the only possible location for the project not just from financial standpoints but also from ecological angles. Here, it is imperative to have objective, well-researched, and transparent Environment Impact Assessments (EIA) that detail environmental and ecological implications of the proposed road. Alternative locations and alignments should be provided, and improperly conceived projects shifted. If such adjustments increase project costs, instead of companies merely depositing money to Compensatory Afforestation and Management of PA (CAMPA), they could direct funds towards appropriate mitigation measures, recommended and monitored by qualified authorities.

If it’s impossible to realign the road after due consideration, then the placement should be designed to cut through the least length of natural habitat, shifted to peripheries or already disturbed areas. Reduction in canopy cover should be kept to a minimum—a good ballpark might be to ensure that no unnatural canopy gap is created. Such projects will also have to mandatorily incorporate wildlife-friendly designs such as flyovers or underpasses suitable for local wildlife movement. Existing CAMPA funds could be utilized to provide additional finances for such design modifications.

With regard to PAs—covering a mere 5% of India’s land, they hold the majority of the nation’s remaining wildlife. Therefore, the conservation implications of road projects through PA are more profound and extreme caution is advisable. Placing new highways or expansion of existing roads within PA is best completely avoided.

The road to sustainable development

For all this to be efficiently implemented, it is important that government officials, ecologists, conservationists, and engineers have productive discussions to arrive at win-win solutions. Elsewhere, such discussions has resulted in success stories with near-zero ecological costs even within biodiversity hotspots (example). However, it currently seems that suggestions of any kind to modify structure or alignment are construed as roadblocks to progress. Project proponents cry foul over suggested changes, complaining about cost escalation. Simply put, developers have chosen convenience over compliance, yet garnered tremendous support for such a view.

Profit-maximizing behaviour of private players is to be expected. What is worrying is that our government is seemingly abdicating its responsibility towards conserving biodiversity. While the information and expertise to explore alternative development pathways exist, the political will to listen seems lacking. Ultimately, private and government agencies alike have completely relegated an essential system of checks and balances to a tedious Kafkaesque parody.

To say that India can only afford limited consideration of ecological implications seems a decidedly shortsighted way of thinking. Instead, we can pioneer new development models where environmental sustainability and wildlife conservation are given as much credence as economic growth. Building a culture of ecological sensitivity will allow for sustainable use of natural resources and help keep spaces for biodiversity.


Meghna is from the Yale school of Forestry and Environmental Studies, USA and Sachin is from James Cook University, Australia. Both are graduate students from the National Centre for Biological Sciences, Bangalore, as part of the Wildlife Conservation Society – India program. 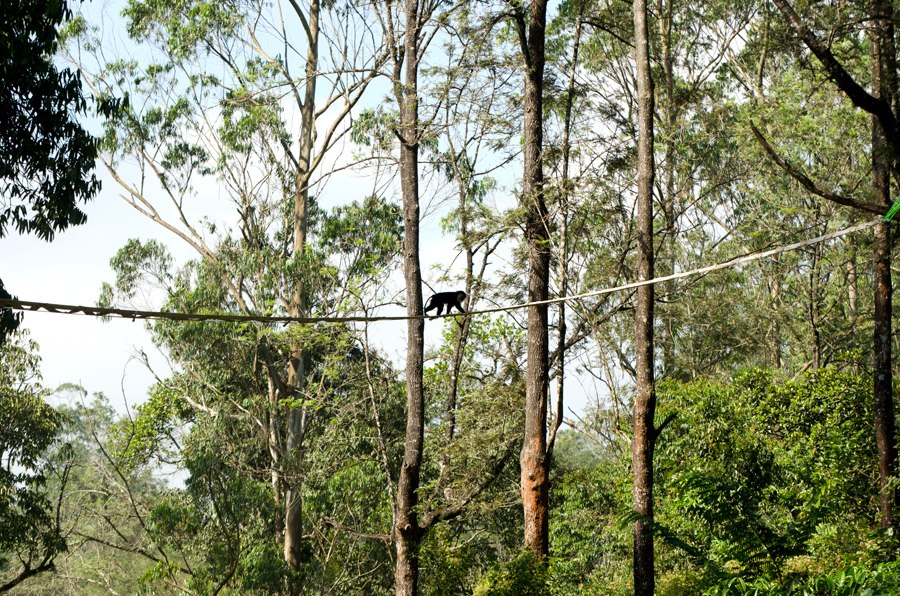