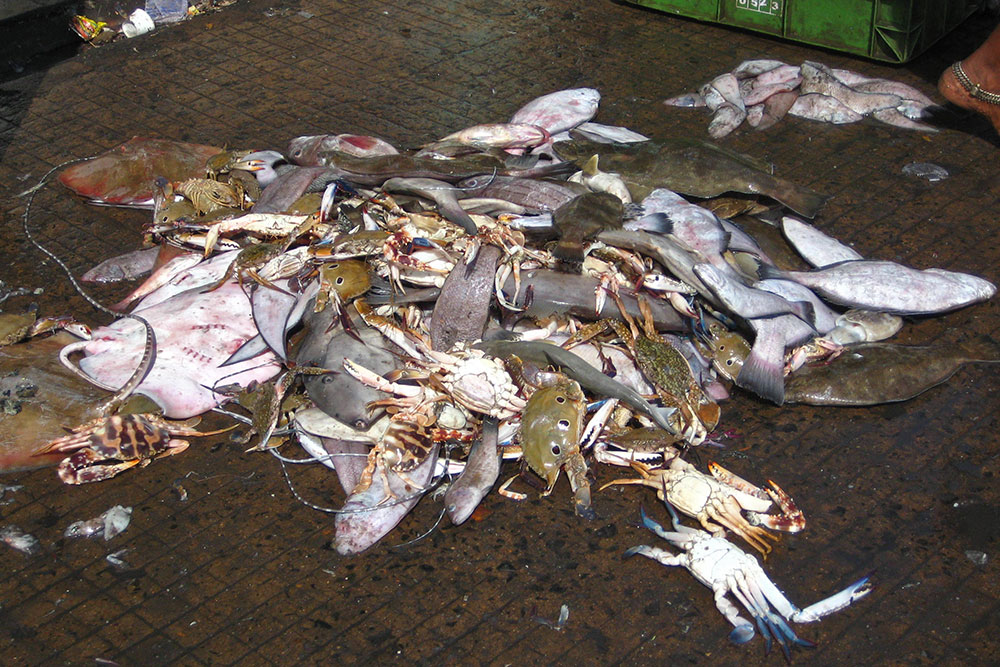 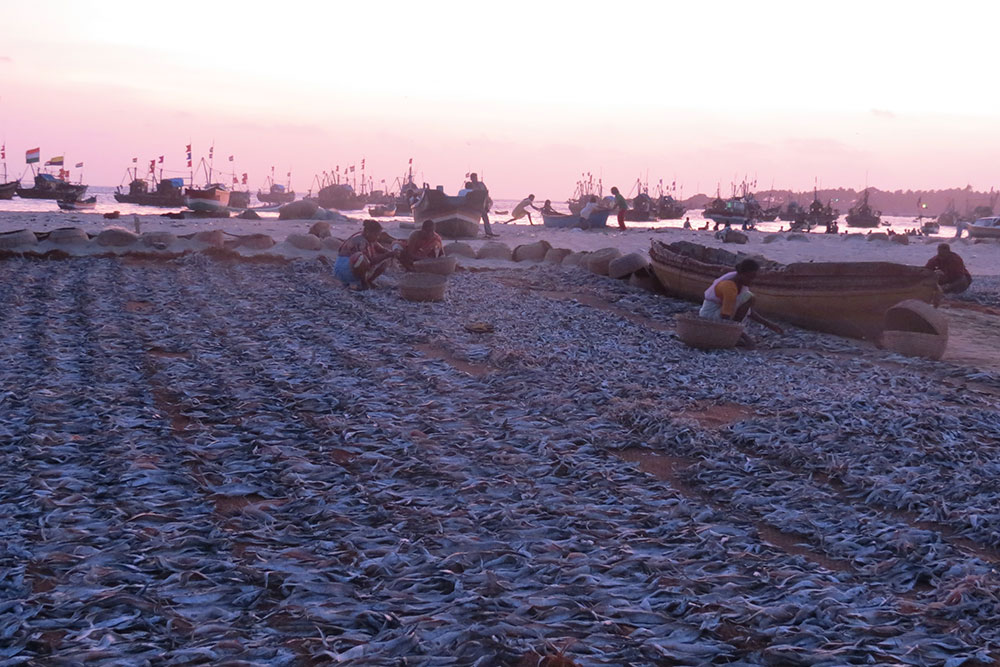 Pooja Rathod
Towards the end of the fishing season, ribbon fish are caught in abundance by trawlers (seen in the background) and dried to stock up for the monsoon season when fishing is not permitted. A lot of the stock is also exported to countries like China.

Overfishing and unsustainable practices are causing fish to disappear from the world’s oceans at unprecedented rates. Pooja Rathod and Tiasa Adhya interact with fishermen in Malvan along the Maharashtra coast to learn about the impact of trawlers and the exploitation of dwindling marine resources.

“Pannas… don hazaar saahashe… paan she sattar!” The bidding calls started at Rs. 50 and reached Rs. 5,000. The monsoon month of July notwithstanding, trade was brisk inside the fish auction market in Malvan, a small town along the Maharashtra coast. As we pushed our way through the crowd to get a glimpse of what the bids were for, myriad marine creatures came into view. We saw basket after basket holding marine crabs with eggs that should have hatched in free waters. Cartons of juvenile anchovies, ribbon fish, sole, mackerels, pomfrets, sharks and rays – none of which exceeded even a metre in length — were also being sold. It continued to pour and the fishermen continued their bids until the last demand. The remaining stock was then either sold as poultry feed, to the pet food industries or simply discarded in the sea. These were juvenile fish, too tiny to be important, or fish that were economically of little value but had unfortunately made it into the nets. Ironically, it was the monsoon season – a time when marine life like fish, crabs and prawns breed and hence should not to be caught. At this time of the year (June-July), all kinds of mechanised fishing are prohibited by law. Ideally, strict adherence to this law would ensure sustainable fishing livelihoods.

The ‘Census of Marine Life’, a decade-long international survey of marine life by a global network of researchers from more than 80 nations, completed in 2010, estimated that 90 per cent of the oceans’ big fish have disappeared due to overfishing. Bluefin tuna have disappeared from the seas of Northern Europe. Halibut suffered a similar fate in the North Atlantic during the 19th century. The fishing trawlers in the Irish Sea bring back nothing more than prawns and scallops. In West Africa, fish stocks are being wiped out, depriving subsistence fishermen in Senegal, Ghana and Angola. Despite this, in Southeast Asia, even juvenile fish are being caught to become prawn feed or chicken feed. What is the picture like back home? The fish catch in Maharashtra has halved in recent years, from 449,000 tonnes in 2002 to 244,000 tonnes in 2010.

We needed to have a dialogue with local fishermen, whose lives have been tied to the seas for generations, to get an insight on why they choose to fish during the ban. Fishing in the monsoon can also be expensive and life threatening on account of the harsh weather and uncertain tides. When we spoke to some gill netters, the fishermen told us how the trawlers, usually owned by rich businessmen, allowed very few or no fish to make their way to the shallows where the artisanal fishermen worked. Trawlers fished far too close to the shore though the law prohibits them from fishing within sight of the shore, a zone reserved for artisanal fisherfolk. They claim that there is often ‘trawl traffic’ on the sea on account of the sheer numbers of trawlers working in a given area. Hundreds of trawlers frequently work from four days to a week, until they obtain enough catch. The artisanal fishermen said that monsoon was the only time when sufficient numbers of fish are left alive to reach shallower waters . The trawlers swept everything, they said, like a vacuum cleaner — if a fish is missed by one trawler, it is caught by another. “At this rate, we won’t have any fish left in the sea within this decade,” said one fisherman with remorse. Most complained of a rapid decline in high-value fish like king mackerel and pomfret. Young fish are caught these days and therefore do not survive to breeding age. Low value fish like ‘croakers’ are now preferred by middle-income customers, as the other fish are either unavailable or too expensive.

To add to the existing problems, ‘purse seine net fishing’ was introduced into Maharashtra recently. These conical, purse-like nets are capable of scooping entire shoals of fish using a technique that resembles the drawing of purse-strings. It costs around Rs. 15 lakh to set up such nets and while earlier, there were just two nets in use, today, as many of 600 are deployed in Maharashtra alone. What chance do local, traditional fisherfolk have? Ironically, it is the Maharashtra Government, which provides subsidies approaching 75 per cent that is responsible for this unsustainable fishing practice that is emptying the seas all along the Konkan coast. Fishermen in Sindhudurg district have asked for a ban on purse seine net fishing along the district’s coastline and when the state government agreed, boat owners using purse seine nets went to court. But the fishing community in Malvan is not giving up. They continue to oppose the purse seine fleets, which land up off the Maharashtra coast not just from Goa but from other southern states as well… all ignoring the monsoon fishing ban.

Yes, the Coast Guard fines boat owners they catch, but such fines are minimal when compared to the high value of stock in their holds – Rs. 30,000, as against the landed fish value of Rs. 2,00,000.

What are the driving forces behind the destructive ambition of the trawlers? The answer is obvious: customers who flock to the coasts. When we travelled along the coast to see the magnitude of this oceanicide, we were stupefied. When fishing is banned in Goa, suppliers to hotels and restaurants travel to Maharashtra, Kerala and even Tamil Nadu. In fact, hoteliers now claim they do not even need to refrigerate fish, since they get fresh fish (illegally) this way. While a piece of kingfish is out of the reach of the economically weak, as one smallish bakery owner reported, elite customers are willing to shell out as much as Rs. 1,500 for each portion. While the red snapper has steadily made its way into the menu of most restaurants, brackish water breeders like the rabbitfish are being consumed by locals. The per kilogramme price of prawns, pomfrets and kingfish has tripled over the past decade. Do the hoteliers perceive a decrease in the fish stock? No. Because the middlemen traders serve as genies in a bottle for them, producing what they want, when they want it… while stocks last!

Isn’t the increase in the price of fish an indication of the difficulty that trawlers have in obtaining them? We wish this reality would sink in.

A friendly Goan told us how the Russian tourists in Goa have influenced shark fishing, which has increased over the years. The Russians tend to favour restaurants that offer shark-fin soup. Around the world, up to one hundred million sharks are finned alive, then thrown back to die awful deaths.

This article is not a clarion call to stop eating fish. Rather, I urge the fish-eating public to exercise responsibility in their purchase habits. In West Bengal, hilsa has such a high demand that over-fishing is the order of the day and juvenile fish have become targets. Researchers say the hilsa might soon enter the “endangered” category of wild species. Last year, global fish consumption hit a record high of 17 kg. per person per year which means that in comparison to 1950, people are eating four times as much fish as they once did, all in the face of depleting fish stocks and rising human populations.

Reports scream at us every day – fewer than 100 cod have been found in thirteen years in the North Sea, large areas of seabed in the Mediterranean and North Sea resemble a desert, West African fisheries have declined by 50 per cent in 30 years. The tropics might witness a decline of 40 per cent by 2040, which would adversely affect as many as 400 million coastal people in Africa and Southeast Asia. When communities lose their fish source it is more than just livelihoods that are at stake… it’s nutrition, too. It’s not too late to restore the health of the oceans. Local fishing communities have always been sustainable. But the industrial scale at which fishing is currently practiced is killing off the last of the planet’s wild animals that humans continue to hunt in large numbers.

Perhaps ours will be the last generation to do so.