Coexistence of River Dolphins with Fisheries in India 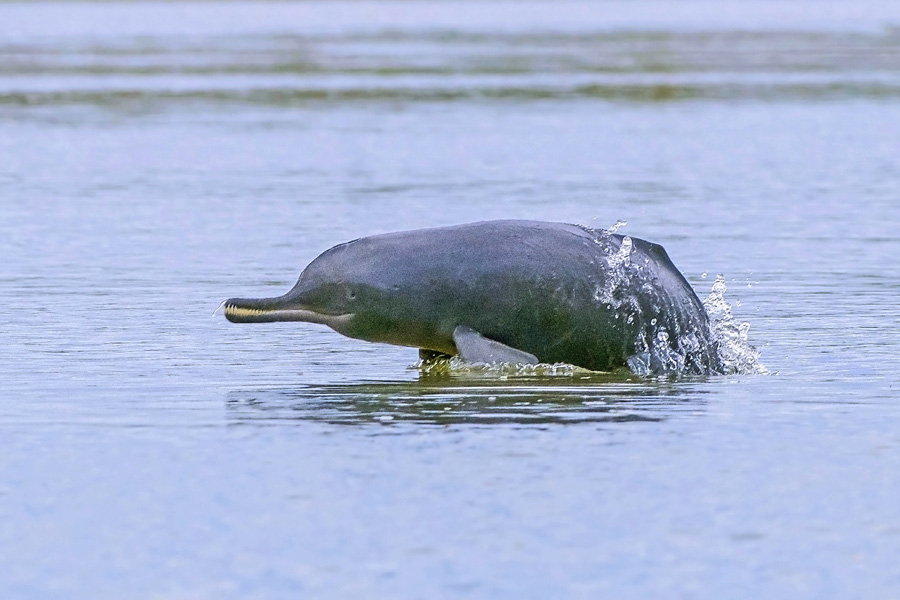 Udayan Borthakur
These freshwater mammals have become endangered because of overexploitation of rivers by fisheries and by extreme river pollution.

Authors Nachiket Kelkar, Jagdish Krishnaswamy, Sunil Choudhary, and Dipani Sutaria have investigated the distribution of the Gangetic River Dolphin (Platanista gangetica gangetica) and correlated their abundance with fishing activity to find if there can be successful coexistence of fisheries and conservation of the dolphins. These are the highlights of a paper that was published in Conservation Biology in 2009.

The present state of rivers in India is dismal. Pollution and intensive fishing pose a serious threat to most river and freshwater ecosystems. The high rate of human dependence on rivers for economic needs has endangered the lives of many species inhabiting our rivers. To restore the health of these ecosystems it is necessary to balance economic gain and biodiversity conservation. In India Gangetic river dolphins are found in the tributaries of the Ganga and the Brahmaputra. They have become endangered species because of overexploitation of these rivers by fisheries and also by extreme river pollution. Conservation of charismatic riverine species (e.g. dolphins, crocodiles, otters) can be successful if they also provide viable economic benefits to the dependent local people.

The study was conducted in the Vikramshila Gangetic Dolphin Sanctuary (VGDS), a 65km stretch of the Ganga River between Sultanganj and Kahalgaon towns in Bhagalpur, Bihar, India. The VDGS is a protected area established in 1991 to protect the endangered Gangetic river dolphin.

The study was conducted in the dry season from December 2007 to May 2008. The distribution and habitat use of the Ganges river dolphin was assessed. Boat surveys were conducted to record dolphin distribution. The river was divided into 28 straight line segments each of 2.5km long, in east-to-west and west-to-east directions. This exercise was replicated 18 times. Three trained dolphin observers recorded the number and age class (calf, sub-adult, adult) of the dolphins present in each of the segments. The abundance of dolphins was estimated by a two sample capture-recapture method i.e. two teams of three observers each were used to record the dolphins simultaneously and independent of each other. Ecological factors and human activity influences were used to assess the use of the habitat by the dolphins. The ecological factors included: water depth, channel width, type of sediment, river vegetation, river profile and flow. The anthropogenic activity influences were: type of boat used for fishing, boat noise, and nets used. These factors were chosen since they had an influence on how the dolphins used their habitat. The distribution of dolphin prey was also estimated.

Fishing activity was assessed by conducting interviews with fishers (n=105). They were questioned on the type and mesh size of the nets they used, the time they spent on fishing, the distance travelled, the size of fishes caught and other socio-economic information. The intensity of fishing in each of the 28 line segments was categorised as: low (0-2 boats/km), medium (2-6 boats/km), and high (8-55 boats/km) based on the number of boats present in the area.

Dolphins preferred habitats with muddy and rocky substrates rather than homogenous sand deposits. They preferred mid channel waters with depths ranging from 5.6-13.5m and shallow waters near sediment deposition areas over depths of 1.85m. Areas with rapid water flow such as confluences and eddy currents were highly preferred. These areas considerably overlapped with fishing areas; sites with moderate fishing were preferred by the dolphins than areas with heavy fishing intensity. Dolphins preferably prey on small sized fishes and 75% of the fishes caught by fishers were small sized fishes. This overlap of prey and fisheries suggests a high level of competition between the two groups.

The estimated dolphin abundance in VGDS is higher than in any area where dolphins are known to occur. This is due to reduction in intentional killing of dolphins in VGDS through various conservation awareness programs. Dolphins seem resilient to changes in fish community structures and may persist in overfished areas. Therefore to maintain a healthy coexistence of dolphins and fisheries, efficient management of fisheries is needed by curbing destructive fishing practices, restoration of fish stocks, and provision of an alternative livelihood for fishers. Also fishing should be regulated in dolphin hotspot areas and maintenance of adequate water flow in the tributaries during the dry seasons is needed to maintain their numbers. Following these strategies may help in the conservation of river ecosystems and riverine species, with a viable economic gain to the dependent fisheries. 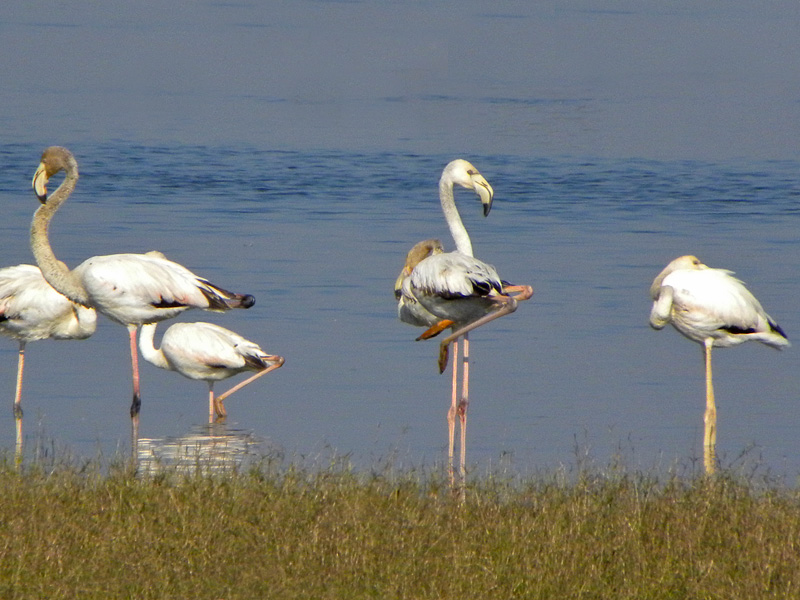 Greater Flamingo with sub-adult chick on its back, Dholpur