The Union Ministry of Environment, Forest and Climate Change (MoEFCC) has released a new draft notification seeking to reduce the proposed Eco-Sensitive Zone (ESZ) around Bannerghatta National Park by a further 100 sq. km. This would reduce the zone to just 1km from the park’s boundary, and a mere 100m in some places.

Bannerghatta National Park is part of a contiguous wildlife habitat of nearly 1400 sq. km. within the Mysore Elephant Reserve with breeding populations of Asiatic elephants, high faunal and floral diversity and an important watershed for several rivers which join the Cauvery.

The 100 sq. km. proposed to be removed from the ESZ deliberately and cleverly skirt around existing stone quarrying areas, shielding them from the law by keeping them out of the purview of ESZ regulations. See map below and in high resolution. The reduction of the ESZ by 100 sq from 2016 (dotted) to 2018 (gray) shields pockets of stone quarrying and granite mining (red areas). Map courtesy: Foundation for Ecological Research, Advocacy and Learning (FERAL).

The October 30th, 2018, notification — based on the Karnataka government’s recommendation — proposes an ESZ of 169 sq. km. covering 77 villages compared to the 268.9 sq. km. of the 2016 notification. As per the SC ruling, the default radius is 10 km in the absence of a final notification. Yet, the default ESZ around Bannerghatta is rife with violations. Clearly, both the Central and State government have much to answer for in this matter.

The notification is open to public comments till Dec 30th, 2018, after which it will be finalised. Help us put a stop to this by immediately sending an email to esz-mef@nic.in voicing your objections to the October 2018 draft notification and demanding that the 2016 notification with an area of 268.9 sq. km. be issued as the Final ESZ notification.

Conservation India, on behalf of several online campaigners, will consolidate all signatures (around 20,000) and mail it to the concerned authorities.

The original campaign (Feb 2017) appears below:

Illegal dynamiting of hillocks for stone quarrying and crushing activities are wreaking havoc in the Eco-Sensitive Zone (ESZ) of Bannerghatta National Park (BNP). Stone quarrying activity is going on unchecked in Ragihalli and Shivanahalli villages adjacent to the Park just outside Bengaluru, destroying families and endangering wildlife, as stones rain down upon their homes every day. Most of the quarries operating are inside the ESZ boundary of the park (see map below).

What you can do

Help us put a stop to this by joining us in signing on to the following letter to the concerned officials mentioned below, urging them to take urgent action to save Bengaluru’s beloved Bannerghatta.

Your voice is powerful. Add your name below & make it heard now to save Bannerghatta!

Thank you for your support!

This campaign is now closed. Almost 2000 concerned citizens from all walks of life have added their signature to this memo, which will be reaching the authorities soon. Watch this space for further updates on this campaign.

Learn more about the issue

Our letter will be sent to:

See download section for the official memo that will be submitted to the authorities after adding your signature.

The Ministry of Environment, Forests and Climate Change (MoEFCC) has issued a notification constituting the ESZ with widths ranging from 100 mts to 4.5 kms from the National Park boundary. The notification categorizes stone quarrying and crushing as prohibited activities. Local politicians with vested interests in stone quarrying are now trying their best to dilute the ESZ notification by further reducing the area.

Over 200 trucks transport the stones outside of the area every single day, causing tremendous disturbance and degradation of a fragile habitat that is home to iconic endangered species like elephants, leopards, wild dogs, sloth bears, gaur, sambar, pangolins apart from the large numbers of amphibians, reptiles and birds!

As can be seen in the map below, these activities are being carried out right in the middle of the ESZ of BNP (see Google Earth satellite imagery of the quarries in the ESZ) that has been notified to protect an important elephant habitat in southern India that also ensures habitat connectivity with Cauvery Sanctuary to the South. The affected areas are also home to forests that form the watershed for several streams that go on to become tributaries of the Cauvery river – the lifeline of the entire region. All of this is going on unchecked, blatantly violating several environmental and wildlife protection laws, despite multiple orders by both the Supreme Court of India and the High Court of Karnataka banning such activities in the region. A map showing quarries (in red) operating inside the ESZ boundary of BNP.

It is once again our duty to let decision makers know that nature lovers in India and Bengaluru’s citizens oppose the destruction of our unique and treasured national park. Your intervention will ensure that Bengaluru’s unique national park is not lost forever.

The grotesque scale of the quarrying in Bannerghatta 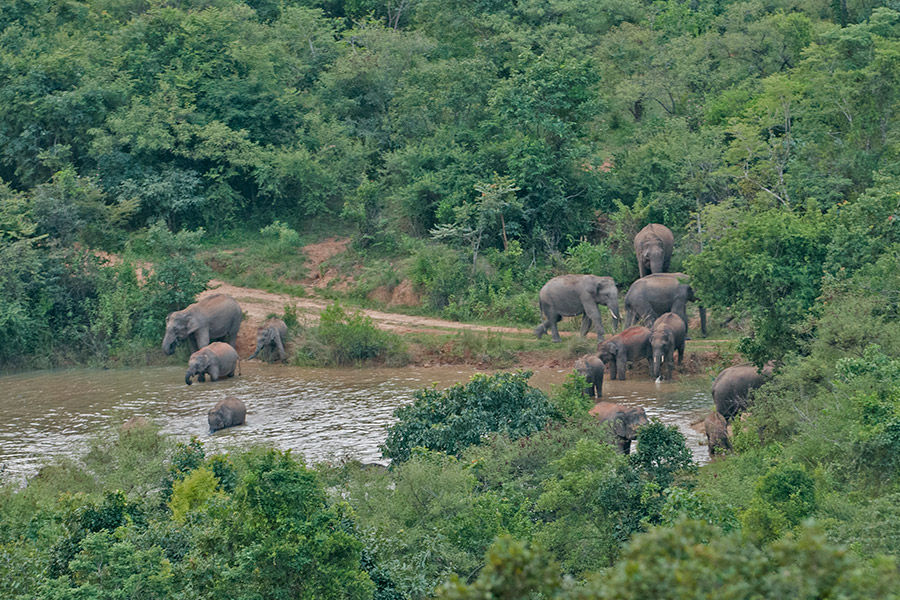 Illegal mining poses a threat to the elephant corridor & other wildlife in the area.