The newly-reconstituted National Board for Wildlife (NBWL) has cleared the project proposal to construct a road through Kutch Desert Wildlife Sanctuary in Gujarat has received clearance. The previous NBWL had unanimously rejected the proposal after a site inspection conducted by an expert committee. View reports:

The road proposal, whose ecological damages CI highlighted in this campaign, was unanimously and strongly rejected by all members of the MOEF constituted Standing Committee of the National Board for Wildlife (NBWL) on June 6th, 2013. The project was rejected on grounds that it would have a fatal impact on the fragile ecology of the Kutch region, particularly the nesting site of flamingoes, which it was feared would be abandoned spelling doom to the entire population of these birds in the Indian subcontinent.

Test: Asia’s largest flamingo breeding ground, the famed ‘Flamingo City’ in Kutch Wildlife Sanctuary in the western Indian state of Gujarat, is in imminent danger from a proposed massive road construction project. ‘Flamingo City’ is an Important Bird Area (IBA) declared by BirdLife International. While the project proponent claims that the road is meant to facilitate mobility for the Border Security Force (BSF), our sources on the ground unequivocally assert that this project is nothing but a cover for promoting and expanding tourism in the region.

In September 2011, a 3-member expert team from India’s top statutory wildlife body, the National Board for Wildlife (NBWL), assessed the potential ecological impacts of the project. Their recommendation? Rejection of the road proposal. To quote from their site visit report, “the team is of the considered opinion that if the proposed road is allowed to be constructed, it would in all probability result in the abandonment of this breeding site and thus India would lose the only breeding site of flamingos, which in turn could spell doom to the population of these birds in the Indian Subcontinent.”

Read the site inspection report by the committee members.

The NBWL expert committee has recommended an alternate alignment, which will spare this fragile ecosystem from devastation, while serving the purpose of the BSF. Prerna Bindra, a member of the Standing Committee of the NBWL has written a letter to the Minister urging her to reject the present proposal.

What you can do

The matter is now pending before the Ministry of Environment and Forests, Government of India. We recommend that you immediately write to the Minister urging her to reject this proposal and consider the alternative alignment suggested by the expert committee. Just a few months ago, your letters and emails helped avert irreparable harm to fragile Narcondam Island and its unique hornbills from a RADAR project proposed by the Indian Coast Guard. It is once again our duty to let decision-makers know that nature lovers around the world and India’s citizens oppose the destruction of the planet’s last wild spaces. Your intervention will ensure that the only flamingo nesting ground in the Indian subcontinent is not lost forever. Please also send a hard copy of your letter by snail mail to the address below. Please email us a copy for our records and follow up, to info@conservationindia.org.

Your voice is powerful. Make it heard now to save Flamingo City!

You can click on the ‘Write to’ link in the ‘Take Action’ section in the top right section of the page to write an email to the minister. The default subject of the email will be “Please stop the road through Flamingo city”.

Spread over 7506 sq. km, Kutch Wildlife Sanctuary (KWS) hosts several other rare ecological and archeological wonders. The region is home to a host of other endangered species like the Indian wild ass, Great Indian Bustard, Indian wolf, caracal, Houbara Bustard, desert fox and desert cat. KWS is also a critical gateway for winter migrants from across the globe into the Indian sub-continent.

Another unique feature of this region are the mangroves of Shravan Kavadia, a rare kind of mangrove found nowhere else in the world. The region is also of great archeological importance, containing ruins of the ancient city of Dholavira, which was part of the 5000-year-old Indus Valley civilisation.

The proposed road would run in close proximity to all these and could irrevocably destroy Flamingo City and the sacred mangrove of Shravan Kavadia, and adversely affect the historical ruins of Dholavira.

A proposal for the diversion of 79.474 ha of forestland in Kutch Desert Wildlife Sanctuary and Wild Ass Sanctuary for construction of the Gaduli to Hajipur-Odma-Khavda-Kunariya-Dholavira-Maovana-Gadakbet-Santalpur road has been placed before the Standing committee of the National Board for Wildlife. This includes new road construction as well as up-gradation of existing stretches.

The Gujarat State Public Works Department (GSPWD) has submitted the proposal, ostensibly to “provide greater access to Border Security Force (BSF) that guards the line separating Gujarat from Sindh region in Pakistan.” However, the road is at least 30 to 40 km inland of the border with Pakistan. According to reliable sources the real motive for the road is to boost tourism in the region. According to a report in the Times of India, “If the actual purpose of the road is to meet security needs of the Border Security Forces (BSF), officials believe, the proposal to construct it “coincides” with the government’s effort to sell the White Rann as a major tourism attraction in Gujarat.”

Following a decision taken at the 22nd meeting of the Standing Committee of the National Board for Wildlife, a three member expert team (Dr. M.K. Ranjitsinh, Dr. Divyabhanusinh Chavda, Dr. Asad Rahmani) conducted a site visit from 1st September to 4th September 2011 to assess the situation on the ground. Subsequently, the team has strongly recommended rejection of this proposal owing to the grave ecological consequences to the ecosystem and its potential impact on the wildlife. The other Independent Members of the Standing Committee of the NBWL have unanimously supported this recommendation.

Why you should oppose this project

The reason why flamingos continue to faithfully flock to ‘Flamingo City’ for breeding is largely attributed to the peculiar conditions that prevail in this saline desert. Successful breeding is essentially a consequence of the dynamic flow and mix of fresh and salt water. An influx of fresh water from the Luni River in Rajasthan, and also from northern Gujarat and Pakistan, mingles with saline water to create a shallow, salty lagoon with a rich flow of nutrients in which microorganisms, crustaceans, algae and fish thrive. The plan of the proposed road does not take into account the vital importance of this ‘cocktail’ of fresh and salt water. The construction of the road will impound water, forever modifying the fragile fresh water-saltwater balance, which will negatively affect the food chain that supports not only the huge flocks of flamingos but also rosy pelicans, avocets and other waterfowl.

According to the site visit report by the expert team of the NBWL, “The flamingoes build their ‘city’ in the Sanctuary dependent upon the quantum of rain, which itself shows the importance of fresh water influx which has not been taken into account in the dynamics of the proposed road. The impounding of water which is inevitable, will not only affect the building of the flamingo ‘city’, but it would also seriously affect the food chain of the marine ecosystem, which is the very basis of the location of the Flamingo City.”

The other significant ecological site that would be affected if the proposed road alignment were to be accepted is the sacred grove of ‘Shravan Kavadia’. This unique mangrove system — with trees as high as the Banyan — is entirely cut off from the sea, being over a 100 kms inland, and is found nowhere else in the world. This mammoth stand of Avicennia mangrove depends entirely on an underground supply of saline water from the sea. The proposed road, if built, would impede this influx of water and have an unknown effect on the mangrove.

The question we need to ask is: Why is the project still being considered after being unanimously opposed by the independent members of the Standing committee of the National Board for Wildlife, and after a site inspection carried out by an expert committee of the NBWL clearly recommended its rejection?

The ecological devastation that the construction of this road will wreak seems pointless given that there is accessibility by a perfectly viable alternate alignment. The site report compiled by the expert members of the Standing Committee asserts that the alternate road “…is feasible, cost-effective, easy to build and would serve a greater use” and “would not have a significant impact.”

Another crucial argument against the construction of the parts of the road that would traverse the Rann is the fact that it would be accessible for only about six months a year. During monsoonal flooding, the road would be impassable for all vehicles. The huge expenditure of development and maintenance, coupled with the ecological damage of the construction, are extremely strong arguments against the proposed road. 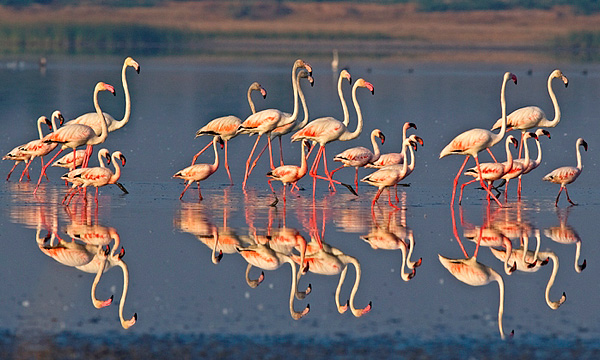