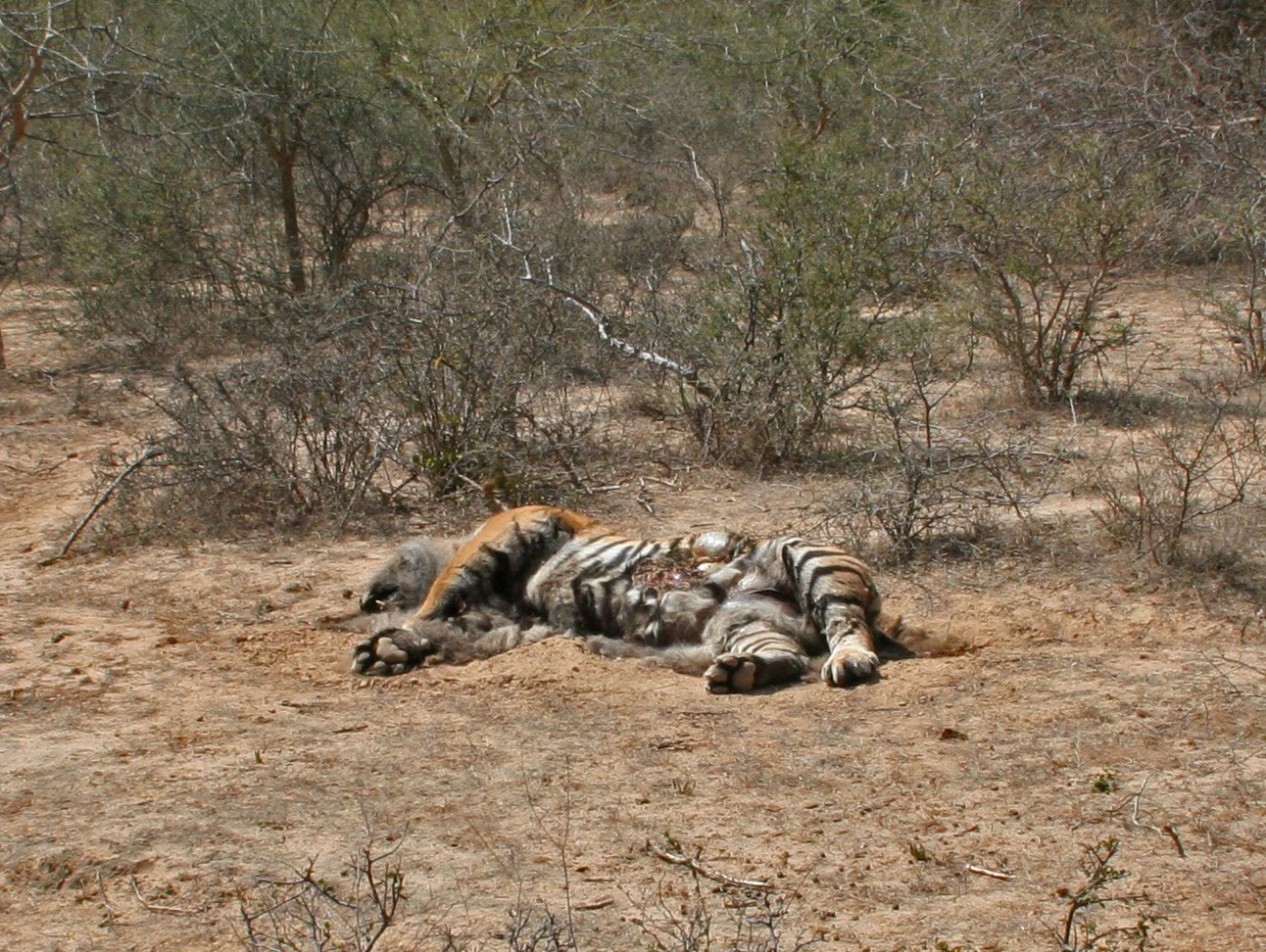 Dharmendra Khandal / Tiger Watch
This tiger had killed a goat outside the park in Talda Khet village causing the villagers to poison the kill. Killing of livestock usually causes conflict.

Wherever wild tiger populations survive and come into contact with landscapes dominated by humans, they pose a threat by preying on livestock, and, less commonly, on people. In most parts of India, people are remarkably tolerant of wildlife damage compared with elsewhere in the world, but sometimes, in conflict situations, local antagonism against tigers often erupts into a serious problem.

Among the many conflict-mitigation tactics available to managers – ranging from lethal control to strict preservation – which ones are the most relevant to resolving conflicts?

The extent of area of the conflict is, thus, relatively small which makes this a localized management problem. However, by its very nature, the conflict poses a serious dilemma for conservationists trying to promote human–tiger coexistence.

Tigers readily kill domestic ungulates. Most such predation takes place inside government-owned forests or common pasturelands, where large numbers of livestock graze. Usually livestock kills are not fully consumed by tigers, because herders intervene. In most multiple-use forests, densities of wild prey are low because of hunting and competition with livestock. In such situations tigers may take as much as 12 % of the livestock herds annually.

In most places, tigers are wary of human beings and avoid encounters. Accidental mauling or killing of humans by tigers is rare, and usually occurs when angry mobs surround tigers that enter human settlements to take livestock. Very rarely, tigers may maul or kill humans they unexpectedly encounter, and the tiger may sometimes eat a part of the corpse. However, such encounters do not lead to persistent attacks on humans—many incidents may require no further management intervention than compensating the victim’s relatives.

Although extremely rare, it has been historically documented in parts of India that individual tigers begin to view human beings as a ‘prey species’ and persistently stalk them. The ecological and social factors that lead to man-eating are not scientifically proven, but appear to be influenced by distinct factors. Man-eating behaviour is exhibited in an unusually persistent form among the tigers of the Sundarban delta.

Wildlife management in India is carried out under the Wildlife Protection Act of 1972, which is strongly preservationist in its thrust. The Act makes it virtually illegal to kill or capture wild animals even when problem animals are involved in severe conflict situations. Only government officials or agents authorized by the Chief Wildlife Warden can authorize such killings or captures. In the case of endangered species like tigers, the necessary authorizations can only be issued by the Director-General of Wildlife Preservation in Delhi, based on an application made by the state Chief Wildlife Warden. While admirable in their intent, these strict legal provisions make it very difficult for local wildlife managers to deal effectively with urgent, life-threatening situations of human–tiger conflict.

Killing of ‘problem’ tigers – through shooting, poisoning of livestock kills and, less commonly, using techniques such as electrocution, snaring and trapping – has been widely accepted and practised by local people in India. In situations involving tigers cornered by uncontrollable mobs (with the imminent prospect of human deaths), or with injured tigers, lethal control is the only practical option. However, urban advocacy groups often oppose such tiger killings. Furthermore, in a free-ranging population, it is very difficult to specifically target the individual problem tiger—several tigers may have to be killed before the problem animal gets eliminated. In such situations, local wildlife managers are often unfairly criticized, based on the unrealistic expectation that only the ‘guilty’ tiger should have been punished. While lethal control is abhorrent to some conservationists, unfortunately it is the only practical option open to wildlife managers in many actual cases of human–tiger conflict.

Capture and removal of ‘problem tigers’

Sometimes managers attempt to capture a ‘problem tiger’ and move it away from the spot of the conflict because this approach has wider social acceptability. However, such translocations are rarely practical, and may not have satisfactory conservation outcomes:

There are several ecological arguments against translocation of even healthy problem tigers into new habitats.

A reasonably effective traditional approach involves employing human herders to guard livestock grazing in tiger habitats, wherever such labour is available and inexpensive. Since most tiger attacks on livestock and humans occur under free-ranging conditions, mechanical barriers like stockades have limited utility.

In the Sundarban, some measures have been implemented—barriers made of wooden poles, wire mesh and nylon netting are being used to prevent tigers from entering villages; and aversive conditioning of tigers using electrified ‘human dummies’ has been tried out. Success has been claimed for these interesting innovations developed by local wildlife managers, however, there has been no experiment to test their efficacy.

Advanced – and expensive – non-lethal aversive conditioning techniques occasionally used for deterring carnivore attacks in developed countries do not appear to be very relevant to the technology and resource-scarce social context in which most human–tiger conflict occurs in India.

In cases of human predation by tigers, financial aid can never fully compensate the loss suffered by the victim’s families. However, prompt delivery of such assistance may help mitigate local hostility towards tigers to some extent. Given the relative rarity of tiger attacks on humans (except in the Sundarban) and the public pressures that such attacks generate, government schemes for compensating for human lives lost to tigers seem to be working reasonably well.

However, payment of compensation for livestock predation – particularly in multiple-use forests with grazing rights – is problematic. Livestock compensation schemes fail for a variety of reasons:

Although compensation schemes of the government (and occasionally non government agencies) have long existed over most parts of India, they do not appear to be highly effective. Furthermore, no systematic evaluation of these schemes appears to have been undertaken during the last 30 years.

Relocation of human settlements is a proactive strategy that tries to alter the ecological setting, and thus prevent conflict. This strategy has been implemented under the Indian government’s wildlife conservation schemes since the early 1970s. For most tiger populations in India survival prospects are bleak in the face of escalating habitat fragmentation and resulting conflict with human interests. As a tool for promoting long-term human–tiger coexistence at the landscape level beyond reserve boundaries, the relocation strategy has several important advantages.

However, despite their ecological desirability and cost-effectiveness, resettlement projects face many practical hurdles. If the relocation process is not transparent, incentive-driven and fair, it can lead to hardship and resentments.

Relocation schemes are not very relevant for dealing with conflicts that occur at the hard edge between strictly protected tiger reserves and the extensive agricultural landscapes outside. It is of primary relevance, however, for enclaves of human settlements within important tiger habitats, or critical corridors that connect insular tiger populations. Fortunately, in many such situations, there seems to be an incipient local demand for relocations, driven by changing social traditions and economic aspirations of the local people.

The future of co-existence

Wildlife managers are severely handicapped by stringent legal requirements, lack of financial resources and technical skills, as well as by social pressures generated locally in conflict situations. A clear policy framework would enable them to avoid ad hoc responses and deal with conflict situations much more logically and effectively. Such a policy framework should:

The option favoured by social advocacy groups in India – of ‘sustainable’ human use of all tiger habitats – or, the ‘don’t kill a single tiger’ approach favoured by some votaries of animal rights, do not seem viable alternatives.

Co-authored by Dr. Rajesh Gopal who is member secretary of the National Tiger Conservation Authority (NTCA).